Paul Pogba must start producing match-winning performances on a regular basis for Manchester United, according to Gary Neville.

The French midfielder helped Manchester United win 3-2 at the Etihad, with his two goals in quick succession dragging United back from a 2-0 deficit at half-time.

“I’ve said all year, Manchester United are a far better team with Paul Pogba in it. He brings arrogance, confidence and belief,” Neville said.

“But when you’re a player who is signed for that money, when you dance like he does and when you’ve got hair like he has you have to play well and you have to match it.


“It’s no good shouting and singing and not playing. You have to play well and he hasn’t in the last couple of months and he’s fallen out with his manager. It’s a difficult situation.

“He is a fantastic footballer and he makes Manchester United a better team. He shows great belief and confidence and shows total confidence in himself — but you have to deliver consistently.”

Neville added: “Then it is demonstrating it on the pitch and doing it consistently.

“He hasn’t done that in the last couple of months, but he is a good lad and a good player and I hope for him and for United that he can start now to affect the biggest matches and win the biggest games.


“That’s what he was brought in to do and today was a big, big turnaround for him. He needed that second half like you wouldn’t believe.”

On Friday, Pep Guardiola said Pogba’s agent, Mino Raiola, had offered the chance to sign the France international in the January transfer window.

Neville said: “At half-time I could see this getting quite messy for Pogba and the questions Jose would have to be asked about his midfield player.

“For Pogba to come out in the second half and score those two goals … he needed that, he absolutely needed that more than ever because there were big questions being asked before this game, during this game and at half-time.”

Pogba, meanwhile, told the club’s official website he was happy with the team’s comeback.

“It obviously feels great to score two goals but it’s an even better feeling to win against Manchester City and not let them win today against us in their own stadium,” he said.


“I feel very happy but there is one side of me that is disappointed too because, with a performance like we had in the second half, if we had done this all season I think we would be fighting for the title with City or we’d be just in front of them.

“This is football. It happens. And we have to carry on like this — we’re learning. I’m very happy today.”

Sun Apr 8 , 2018
Antonio Rudiger blasted his Chelsea team-mates for failing to kill another game as Antonio Conte’s team dropped points against West Ham at Stamford Bridge. The Blues were made to rue their missed chances after Javier Hernandez brought the game level, though Cesar Azpilicueta handed them a first-half lead, in what […] 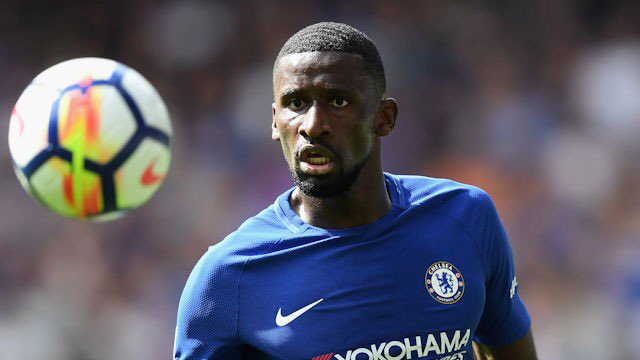