Arsenal head coach Mikel Arteta has questioned the anger of Atletico Madrid after the club decided to match the release clause written into his contract.

And Diego Simone’s side were unhappy that Arsenal failed to give them adequate notice on their intentions, despite there being no need of negotiations between the two teams due to the agreed clause.


According to reports, the move got over the line with less than an hour of the summer transfer window left.

After The Athletic reported the anger Atletico, Arteta said: “When you have a release clause in your contract you assume that that situation can arise at any minute. While the market is open it’s completely legal to do it.

“We have had some communication with them prior to that as well so hopefully they can respect that action.”

Before adding when asked if he doubts over the late talks: ”Yes. When it’s up to the last minutes it’s always a risk. A lot of things have to happen at the same time. It was a challenge to do it in 24 hours but I’m really happy because at the end we managed it.”


And Mikel Arteta has already spoken about his plans for Partey: “I think he allows us to play different formations and he can fit in within those formations in different positions. “It’s a really good thing to have in a squad where, in midfield, I think we were a little bit short.

“I have a few things in mind that I want to start to train with the team and [Partey’s signing] is going to give us a little bit more adaptability and more balance in defending and attacking transitions and the way we have to set up certain structures to attack better in certain moments of the game.”


The new Arsenal signing said: “I feel so happy, I already feel part of the family because the fans have received me, everybody is saying nice things about me and, you know, to be received like this is a great feeling.

“This a great club, it is one of the biggest clubs in Europe and it is a club that deserves to be aspiring for greater things and I think it doesn’t happen in a day, we have to work hard to make sure we are back to where we belong.

“I want to make everyone feel happy.”

3 months ago
Former Manchester United defender Rio Ferdinand has urged Ole Gunnar Solskjaer to drop the club’s captain Harry Maguire from the team. Maguire has endured a miserable start to the new campaign and was sent off during England’s Nations League match against Denmark on Wednesday. Manchester United will play Newcastle this […] 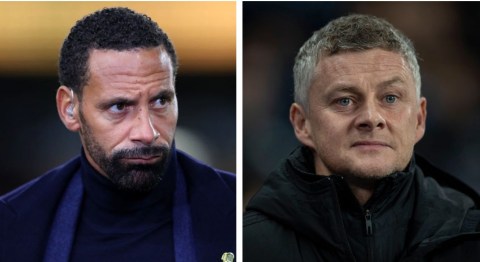