English star Callum Hudson-Odoi has handed Frank Lampard a major boost by indicating he is ready to sign a new five-year deal.

The 18-year-old winger is set to earn £100,000-a-week by staying at Stamford Bridge and he is now only waiting for Chelsea to sign the deal off.


Securing Hudson-Odoi to a new contract was a major priority for manager Frank Lampard after Chelsea agreed new deals with Ruben Loftus-Cheek and Mason Mount.

It means that in a summer window in which they are banned from signing players and sold Eden Hazard to Real Madrid, Chelsea have secured the futures of their brightest young stars.

Hudson-Odoi’s future had looked very much uncertain with his current contract due to expire at the end of next campaign.

Hudson-Odoi handed in a transfer request in the January window to try to force through a move to Bayern Munich. But Chelsea turned down the request and Bayern’s bids, and have managed to convince him that he will get the opportunities he wants under Lampard.

Lampard also spoke privately to the winger to tell him how highly he rates him and how he seems him as a key part of his squad. Hudson-Odoi is currently recovering from a ruptured Achilles’ tendon and will miss the start of the campaign.

The blues are currently completing the legalities connected to the new deal – with Hudson-Odoi set to sign once the formalities have been done.

“He can show, right here at Chelsea, the team he came through the academy at, that he is going to be a world-class player – because I truly believe that.”

Tue Jul 23 , 2019
Chelsea manager Frank Lampard has hit back at Willian’s claim that he has already been offered Eden Hazard’s No.10 squad number. Hazard’s transfer to Real Madrid means Chelsea will have a new No.10 for the first time in four years with the Belgian having vacated the shirt previously warn by […] 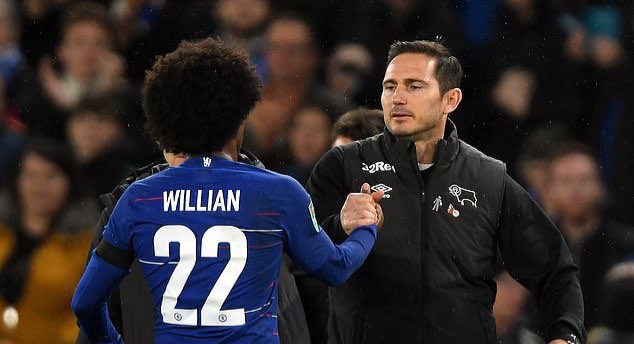