Ramos was asked: ‘What do you think about Griezmann saying he now eats at the same table as [Lionel] Messi and [Cristiano] Ronaldo?


He replied with a Spanish refrain: ‘Ignorance is always bold’.
‘They are more of a team without Cristiano’:

Before adding: ‘When I hear this kid talking I think about Totti, Buffon, Iker Casillas, Raul, Andres Iniesta and Xavi who have homes full of trophies but never won a Balon D’Or.’

Atletico Madrid host the final of this campaign’s Champions League and Ramos also grinned: ‘Playing the final at the Wanda Metropolitano is always going to give us a bit of extra motivation.’

Ramos attack on Griezmann may have more to do with something he did after the Uefa Super Cup final than his comments about Messi and Ronaldo.

After Atletico Madrid beat Real Madrid in August Griezmann posted an illustration on his Instagram page of Ramos placing a crown on Griezmann’s head.


Griezmann has been vocal in his criticism of the list of candidates for the Fifa Best awards.

In an interview with Diario AS this week he said: ‘It’s a Fifa prize and it is a shame that no World Cup winner is nominated.

‘I have it in my head and there are three months for me to give everything [to win it].’

Ramos was merciless in bringing down the France international as he added: ‘He ought to let Cholo [Simeone] or [Diego] Godin or Koke advise him.


‘These are people that have certain values that would do him good.

‘But I have never held back in saying that he is a great player.’

Wed Sep 19 , 2018
Mikel Arteta has confirmed that he considered leaving Manchester City to take the Arsenal job over the summer but insists he is ‘very happy’ working under Pep Guardiola. The Spaniard conducted Tuesday’s pre-match press conference ahead of their game against Lyon in the Champions League due to Guardiola’s touchline ban. […] 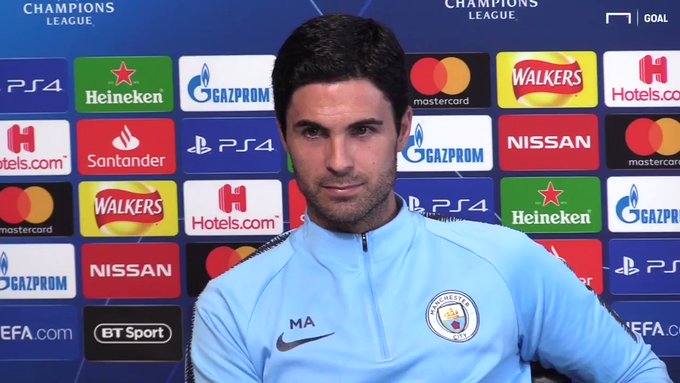