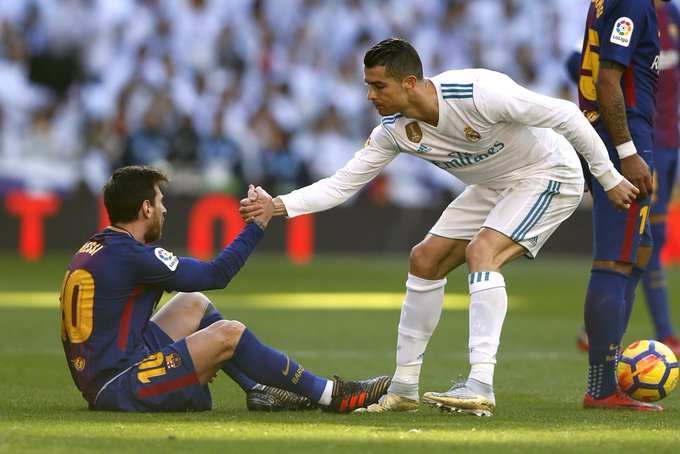 Liverpool boss Jurgen Klopp has picked Lionel Messi over Cristiano Ronaldo, even though he said the Juve superstar was close to a “perfect player”.

Messi and Ronaldo are widely regarded as two of the greatest players of all-time, although talks about who is better continues to be debated .


While Klopp prefers Messi, the German coach paid tribute to both for their dominance, which has seen them win 11 of the past 12 Ballons d’Or awards.

Klopp lauded Cristiano Ronaldo’s physical build, but said Messi was able to display his magic while making it seem so easy.

“For me Messi, but I couldn’t admire Ronaldo more than I do already,” Klopp told YouTube channel freekickerz.

“The explanation is the following. We’ve played against both already and both are almost impossible to defend.


“But Messi has much lower physical requirements from birth on. If you could paint yourself a perfect player, it would have Ronaldo’s height, he could jump and run as high or quick as Ronaldo can do. And what is then even added to that is his total attitude, it is absolutely perfect and professional, it couldn’t be any better.

“And on the other side there is the small Messi who makes everything look so simple. And therefore I like him maybe a little bit more as a player on the pitch. But Cristiano is also an absolutely incredible player.


“It’s really difficult therefore, but what both have in common is that both have left their footprints for such a long time.

“There are also some younger players who have a similar potential, but to do that over this time period is even more incredible.”

In an earlier interview, Jurgen Klopp was asked which former Liverpool player he would sign if he could bring a legend back to Anfield in their peak.

The 52-year-old said that he would choose Steven Gerrard – but he joked the former captain wouldn’t be an automatic selection in the team.

“Stevie, that’s easy! But he’d have to fight for his place,” Klopp told BT Sport .

“The funny thing is we have lived for four-and-a-half years in the same town and I’ve never seen him before.

Wed May 13 , 2020
The Football Association (FA) has taken FIFA to court over Chelsea’s transfer embargo and the case will be heard by next month. The FA are challenging the FIFA over the accusation that there was mismanagement in the registration of players under the age of 18 . The case will be […]