Mauro Icardi is not close to signing a new contract at Inter, according to the player’s agent.

Wanda Nara insisted the Inter captain was a ‘long way off’ signing a new contract amid transfer talk linking Mauro Icardi to Chelsea.

Chelsea owner Roman Abramovich is reportedly interested in a move for Icardi and has made the Argentine a personal target for the club.


Nara revealed four clubs have shown interest in the Argentine, and said the player and her have a good relationship with one club in England.

‘Icardi’s renewal with Inter is a long way off as things stand today,’ she told AS.

‘There are very important clubs that are interested in signing Mauro and we are very far from reaching an agreement [with Inter].

‘The figures that are being talked about in Italy about his contract renewal are not accurate. So far, we have not received a satisfactory offer from Inter.


‘It is not logical for Mauro to renew on the same salary that he receives now. We believe that Mauro is at a superior level.’

She added: ‘We have a very good relationship with the two biggest clubs in Spain who are very interested in Mauro, as well as one in France and one in England.’

Icardi has enjoyed another goal-laden season at Inter Milan with 13 goals in 22 matches this campaign.

The 25-year-old is under contract at Inter until 2021 and has a £90million release clause in his current deal.


Real Madrid are believed to be keeping tabs on Icardi, while Paris Saint-Germain are also interested.

Thu Jan 10 , 2019
Chelsea have rejected an offer from Barcelona to swap Willian for Malcom which also includes cash. It is understood that the Spanish giants are prepared to sell Malcom even though they paid £38 million for him from Bordeaux just last summer. Willian has been a Barcelona target in the past, […] 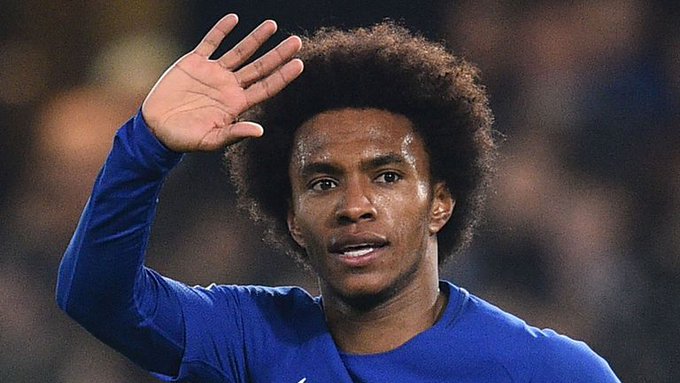