The 21-year-old has been in superb form since the Norwegian’s arrival at Old Trafford with three goals in his last five matches.


One of Solskjaer’s major changes since taking over from Mourinho at United has been to play Rashford as a central forward instead of out wide.

According to the Daily Star, Rashford has been told by Solskjaer during United’s training camp in Dubai this week that he is now the club’s No.1 striker ahead of Lukaku.

The report also claims that Rashford will start ahead of Lukaku for United’s game against Tottenham at Wembley on Sunday.

Lukaku missed Solskjaer’s first two matches in charge after being granted compassionate leave but has scored in all three of the matches he has played since his return.


Solskjaer has won all five of his matches in charge so far and United’s first-team coach Kieran McKenna has praised his impact.

‘I think that, whether the players are 17 or 18 or senior internationals or top, top players, I think they want the same things.

‘They want to be treated with respect and they want you to help them with their game and improve them as individuals, when the time is right.

‘If you give them those things, you get a really good response from them. I have to say the players have been first class, with their attitude and willingness to learn. They are a really good bunch to work with and that has helped, of course.


‘The staff around the team have also been a great help and I’m looking forward to kicking on now and a positive few years for the club.

‘Over the last couple of weeks, Ole and Mike [Phelan] are coming in with different experiences and different skill sets so the chemistry and dynamic is really good at the moment. They’re enjoyable staff to work with.’

Sat Jan 12 , 2019
Chelsea’s wide forward Willian brushed off reports that he might be leaving the club after securing an important three points against Newcastle United on Saturday. The Brazil international curled home what proved to be Chelsea’s winner at Stamford Bridge against Newcastle. Certain reports have suggested that Willian is unhappy in […] 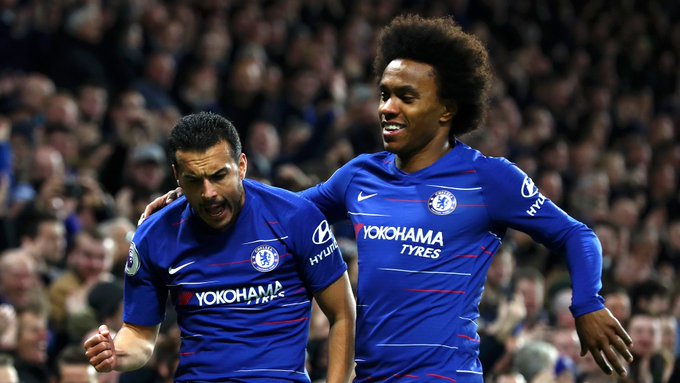