In the wake of World Cup early exit, Ozil felt he was made a scapegoat and chose to quit the international game, citing racism as one of the reasons why he was leaving the national team.

It is a stance that has brought about a great deal of debate in his homeland, and Low has been left angry by the actions of the 29-year-old.


“I expected him to call me, that he would call me personally and tell me,” the national team coach told ZDF after a draw with France in the Nations League on Thursday. “So that’s why I’m disappointed. I’m disappointed with him on human terms. We’ve been together for many years.”

Although the coach seemed to suggest that there was no possibility of the former Real Madrid player being welcomed back into the international fold, he did hint the door might still be open.

“I’ll take the initiative again,” Low said.
Meanwhile, defender Mats Hummels has conceded that he did not expect a picture of Ozil posing with Turkish President Recep Tayyip Erdogan to cause such an issue – the incident that acted as a catalyst to all that would follow.

“We talked about it internally, but I didn’t think it would be as influential on our performance as it probably was in the end,” he admitted to Kicker . “Maybe that was wrong.”

Ilkay Gundogan, who was also at that meeting with Erdogan before the World Cup, was given something of a mixed reception when he came on as a substitute in Thursday’s game with France.


The Manchester City midfielder admits he felt anxious before his introduction but was pleased to see the fans applaud him onto the pitch.

“I was nervous when I started getting ready on the bench,” he said. “I don’t have to be scared, but there was a bit of nervousness, because I didn’t know how much of a reaction there would be.

“I was very happy there was so much applause, so I applauded back. From then on, I could concentrate fully on the game.”

Germany turned in an outstanding performance against the world champions on Thursday, forcing a number of amazing saves from debutant France keeper Alphonse Areola.

However, they were unable to make a breakthrough and go into their friendly game with Peru on Sunday seeking just a third win in eight internationals.


Ozil will not be present in their ranks, having won 92 caps for his country, scoring 23 goals. Furthermore, he was an important member of the squad that won the 2014 World Cup in Brazil.

Instead, he remains with Arsenal, where head coach Unai Emery has been forced to field questions over his relationship with the player, who has been accused of being lazy.

Fri Sep 7 , 2018
Chelsea manager Maurizio Sarri has confirmed that he found out he had been sacked by Napoli only by watching the news on television. The Italian boss took over at Stamford Bridge this summer following a remarkable spell with the Serie A team. He secured Napoli’s highest ever points return last […] 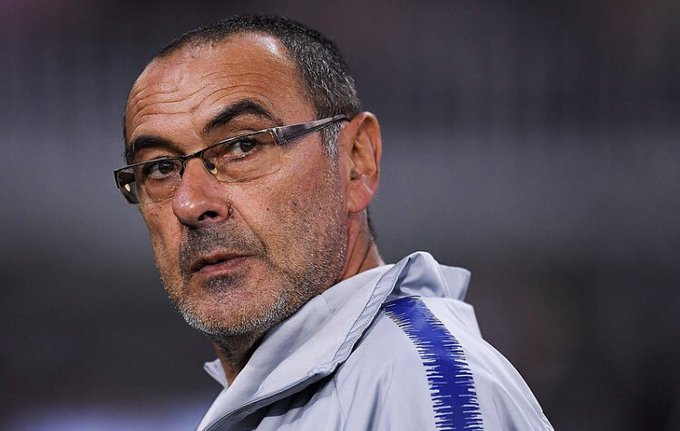