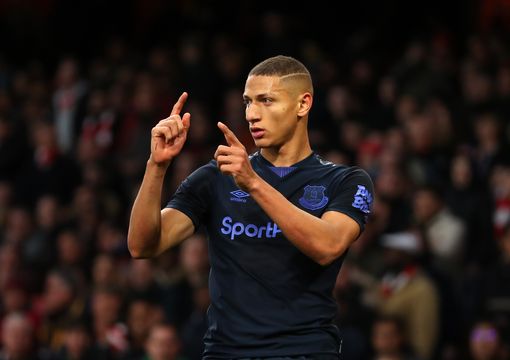 Everton forward Richarlison has comfirmed that he received offers from Barcelona and Manchester United in the January window which were each turned down by his club.

The Brazilian joined Everton at the start of the 2018-19 campaign and has gone on to be an important part of the club, netting 13 goals in his first League season and currently 10 in 2019-20 prior to the interruption caused by the coronavirus crisis.


Richarlison also lined up for Brazil in their successful 2019 Copa America campaign, and his remarkable performances for both club and country caught the eye of big clubs in Europe.

“There were lots of offers during the season, from Barcelona, from Manchester (United),” he revealed to Los Desimpedidos.


“But the club opted to keep me in the group and I didn’t want to leave in the middle of the season. It’s bad to leave team-mates like this.”

Everton reportedly rejected a €100 million bid from Barca to sign Richarlison in January, and he concedes that he was flattered by the interest.

“Of course you feel impacted, Barcelona is one of the greatest clubs in the world, but I think happiness plays its part as well,” he added.

Everton restart their Premier League season with a Merseyside derby at home to neighbours Liverpool on Sunday evening.

Manchester City’s midweek win over Arsenal means that Liverpool cannot clinch their first title in 30 years against their rivals, but they will be looking for a victory that would leave them one step closer to the league title.

However, the Toffees will need strong performances from players like Richarlison to get a result; and his team-mate Bernard believes he is capable.

“Richi is capable of adapting to any scenario during a match,” Bernard told EvertonTV.

“He’s the type of player who’s really aggressive in the box. He’s fearless and not scared of putting himself about or taking a whack.

“Whatever is happening, the important thing for him is putting the ball in the back of the net. This makes him who he is, a player with a massive presence in the box.”

4 months ago
Frank Lampard has reportedly tested Ruben Loftus-Cheek as a left winger ahead of Chelsea’s return to Premier League action. The midfielder has not played at all for Chelsea this season after rupturing his left achilles during a post-season friendly against New England Revolution in May last year. But he has […]