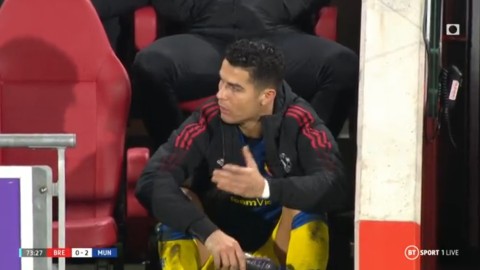 Cristiano Ronaldo made his feelings clear after he was substituted during Manchester United’s Premier League game with Brentford on Wednesday.

The Portugal international made his return from a hip injury which has kept him out of the club’s last two matches.


Ronaldo failed to find the net during his return but he provided a superb chested pass in the build up to Mason Greenwood’s goal which doubled United’s lead after Anthony Elanga’s opener.

Shortly after United’s second goal, Ralf Rangnick replaced Ronaldo with Marcus Rashford and he was clearly furious with the decision as he slowly made his way towards the dugout.


Ronaldo made a quick remark to Rangnick as he made his way to the Red devils bench and then threw his jacket to the ground.

But he wasn’t finished there as television cameras caught Ronaldo still complaining about the decision to United’s coaching staff as he sat on the steps.

Rashford then scored his first goal for United since October to put United 3-0 ahead before Ivan Toney score late on for Brentford.

‘Okay, it’s normal as a striker he wants to score goals,’ Rangnick said about the Ronaldo incident after the game. ‘He came back from a little injury, for me it’s important to bear in mind we have another game in three days’ time.

‘On the other hand we were 2-0 up, the same result we had at Villa Park, and I decided to just make sure we defended that lead this time.

The win keeps United in seventh place in the Premier League, level on points with sixth-placed Arsenal who have played a game less.

4 months ago
Ralf Rangnick told Cristiano Ronaldo he was substituted ‘in the interests of the team’ during Manchester United’s 3-1 victory over Brentford on Wednesday. The Portuguese forward reacted angrily to being replaced by Harry Maguire in the 71st minute with the Red devils already leading 2-0. As he made his way […] 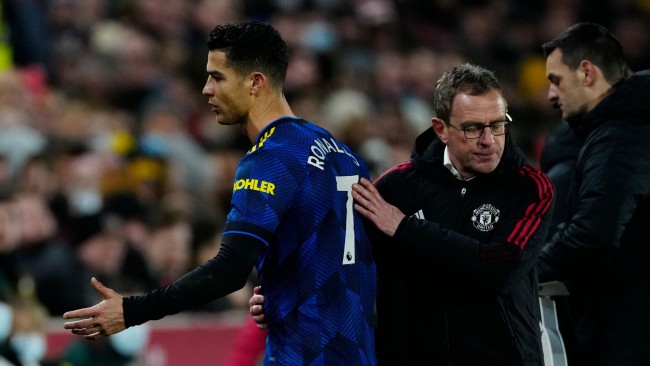