Maurizio Sarri concedes he has never coached a team as inconsistent as Chelsea as he prepares for a run of games that could define their campaign.

Chelsea provided an outstanding response to Wednesday’s humiliating 4-0 loss against Bournemouth by beating Huddersfield Town 5-0 at Stamford Bridge, with Gonzalo Higuain scoring his first goals since arriving from Juventus and Eden Hazard also getting a brace.


It was only Chelsea’s second Premier League win of 2019, while limp displays in losses away to Arsenal and Bournemouth have allowed the Gunners and Manchester United to close the gap in the race for a top-four finish.

After the match Sarri challenged his players to be more consistent, and when asked if he had ever encountered a team with two such different faces he said: “Not in the past, but my target is to improve the mentality.

“I think that in the first 25 minutes we played our football,” he added. “We moved the ball very fast, very well, there was good movement without the ball.


“We were really very dangerous, we didn’t play back to the opposition goal like in the last match with five players sometimes. We attacked the spaces and so I think we played our football.”

Sarri, however, is adamant that Jorginho was never Chelsea’s problem. “Jorginho needs movement without the ball from other players, because he’s used to play at one touch,” Chelsea’s head coach insisted. “It’s very difficult to play one touch without the movement of the other players.

“If the team like in the first 25, 30 minutes plays very well and we have movements without the ball, it’s easier I think.

“Jorginho played very well. I put [Mateo] Kovacic on the pitch after the fourth goal because Jorginho had a little problem to his groin. This is the only reason because in my opinion Jorginho played a very good match.”

“We are trying during training with two players,” he revealed. “The first is [Ethan] Ampadu and the second is Kovacic.


“It may be that for characteristics, Kovacic is more suitable for this team. Ampadu is more defensive but Kovacic is really close to Jorginho in moving the ball very fast at one touch, so I think in the future he will be able to do this position well.

“I think Kovacic could be a very good option, then we need to recover completely [Ruben] Loftus-Cheek after the back problem. Then we can play sometimes with Kovacic as a central midfielder and Jorginho will be able to rest.”

Mon Feb 4 , 2019
Maurizio Sarri has told his Chelsea players to do more to help Jorginho and claimed that the Italian’s less impressive performances have been caused by the team failing to carry out his instructions. Chelsea recovered from their defeat to Bournemouth with a 5-0 victory over Huddersfield on Saturday, with their […] 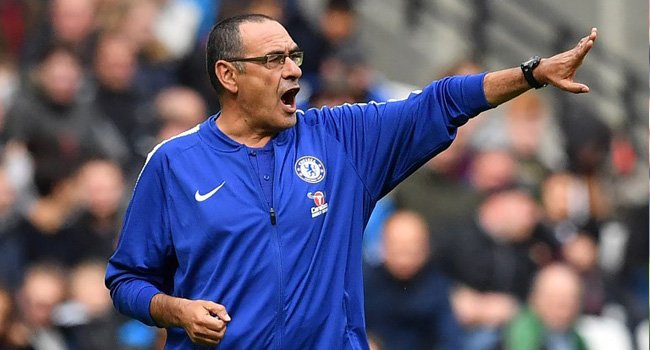