Maurizio Sarri has calmed fears over Pedro after the winger suffered an injury to his shoulder at the end of Chelsea’s 1-0 victory over PAOK in the Europa League.

Pedro was brought down in second-half injury time on Thursday, and seemed to have dislocated his shoulder as he left the pitch.

The 31-year-old has had an awesome start to the campaign, scoring three goals in his first seven games for the in-form Blues.


Although the Chelsea head coach concedes he is unsure on the details of the Spain international’s injury, he does not expect it to be a serious one.

“The problem is his shoulder, but I don’t know exactly the situation,” he told reporters after the game. “I’ve spoken with the doctor, but only for a few seconds. The doctor told me that probably it’s not a very serious injury.”

Willian’s first-half strike was the only goal of the game as the London side opened their Europa League campaign with a win in Greece.

And although Sarri saw his team as the dominant one, he was unhappy that they did not score more.

“I think we played very well. We were in control of the match. It was difficult for everybody to play against us this evening. I hope we were so good and it’s not PAOK’s fault.

“I have seen five or six matches of PAOK and I think there are very good players,” he added.


“For example the number 10, Dimitris Pelkas, I think he is a very good player. Maybe not in this match. But they have some good players.”

Why Cristiano Ronaldo may not miss Manchester United return

Fri Sep 21 , 2018
Cristiano Ronaldo may get to return to Old Trafford to face old club Manchester United after being shown a straight red card in Juventus’ 2-0 win over Valencia. The Portugal international was sent off in the 29th minute at the Mestalla after a clash with defender Jeison Murillo. Ronaldo tussled […] 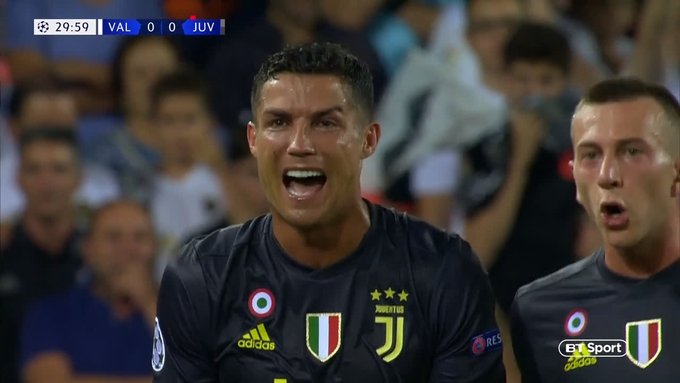