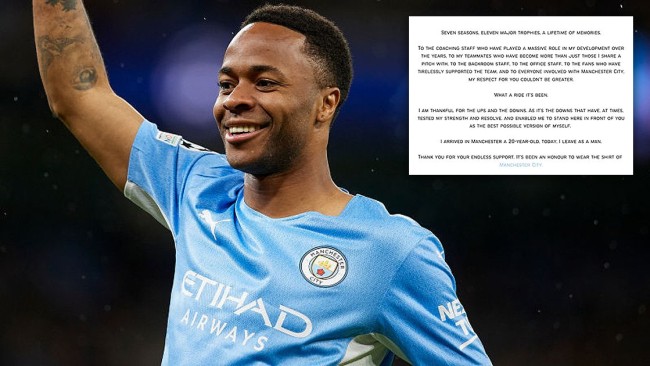 Raheem Sterling has bid an emotional farewell to Manchester City with the England star confirming his move to Chelsea.

The Blues have sealed a £45m deal plus £10m in add-ons for the attacker who has jetted out to the USA to join his new team for pre-season preparations.

In a message shared on his social media channels, Sterling paid huge tribute to the City staff and players with his trophy-laden spell at the Manchester now at an end.

‘To the coaching staff who have played a massive role in my development over the years, to my teammates who have become more than just those I share a pitch with, to the backroom staff, to the office staff, to the fans who have tirelessly supported the team, and to everyone involved with Manchester City, my respect for you couldn’t be greater.

‘What a ride it’s been. ‘I am thankful for the ups and down as it’s the downs that have, at times, tested my strength and resolve and enabled me to stand here in front of you as the best possible version of myself.

‘I arrived in Manchester a 20-year-old. Today, I leave as a man. ‘Thank you for your endless support. It’s been an honour to wear the shirt of Manchester City.’


After joining Man City from Liverpool for £44m in 2015, Sterling would go onto win four Premier League titles, four League Cups and an FA Cup at the Etihad.

He also established himself as a key part of the England squad in that time. He is set to become the first major signing of the Todd Boehly era at Stamford Bridge after the £4billion takeover in May.

Sterling’s arrival could be followed by that of Napoli defender Kalidou Kouibaly, who is expected to join the London club in a deal worth £32m.

Chelsea also remain in discussions to sign another Man City star with Nathan Ake on their list of targets.

7 months ago
Chelsea have begun negotiations with Paris Saint-Germain to sign Presnel Kimpembe as Thomas Tuchel looks to reinforce his back-line even further, according to reports. The west London club confirmed the £45m signing of Raheem Sterling from Manchester City on Wednesday and are now putting all their effort into strengthening a […] 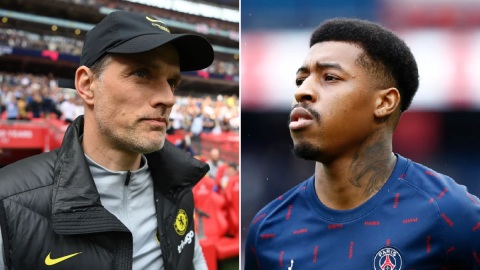