Paris Saint-Germain star Kylian Mbappe has been named as the most valuable footballer in the world by the CIES Football Observatory.

The French star has been valued at £175m, putting him ahead of Real Madrid’s Vinicius Junior and new Manchester City signing Erling Haaland.


The Norwegian star is the Premier League’s most prized star, with his value of £130m more than double the fee that City paid Dortmund for the 21-year-old.

His new teammates Phil Foden and Ruben Dias, as well as Liverpool’s Luis Diaz, were the only other names from the Premier League to make the top 10, while Jude Bellingham was ranked as the highest Englishman on the list at £114m.


It is no surprise to see these names at the top of the list as they are among the best youngsters in world football, although Mbappe would possibly not have placed at that number had he not signed his new three-year deal with PSG.

The Premier League has dominated the list taking 41 of the 100 spots, with Man United’s Jadon Sancho and Bruno Fernandes, Chelsea’s Mason Mount and Kai Havertz, Arsenal’s Bukayo Saka and Liverpool’s Alexander-Arnold all in the top 25.

As the age of the players plays a major role in estimating the valuations there is no room for the likes of Cristiano Ronaldo and Lionel Messi, with Kevin de Bruyne of City the oldest player included, while Barcelona star Pablo Gavi is the youngest at just 17.


While the list is a rough guide, it does make for interesting reading and it will be curious to see if some of the players linked with a transfer this summer move for more or less than their price.

United targets Darwin Nunez and Frenkie de Jong have been valued at £59m and £96m respectively, and while Nunez’s price matches what Benfica want for the player, Barca are said to be holding out for £70m for De Jong, although the Red Devils will still want to negotiate that fee down.

8 months ago
Manchester City have now stepped up their interest in Arsenal attacker Bukayo Saka, according to reports. The 20-year-old ended the 2021-22 campaign as the Gunners’ top scorer in all competitions with 12 goals, 11 of which came in 38 Premier League games. Saka also set up seven goals in the […] 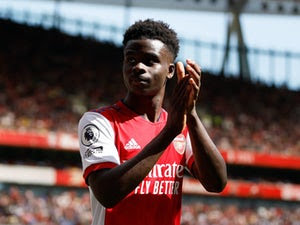