Arsenal need a midfielder who can do the job of Chelsea star Mason Mount, says the gunners legend Lee Dixon.

Arsenal are struggling for consistency this campaign, with a dreadful display in their last Premier League game as they were beaten 3-0 at home by Aston Villa.


And that was their fourth defeat in the Premier League this season – this leaves them 11th in the table, with only nine goals scored in their eight matches to date.

Arteta is struggling to get goals out of Pierre-Emerick Aubameyang, Alexandre Lacazette and Willian, while the club’s midfielders too have struggled for goals.

Dixon feels Arsenal need a link between the midfield and the front three and has picked out Mason Mount as the kind of player they need for the job and take the pressure off Aubameyang to score the majority of the club’s goals.

‘That is a huge, almost total reliance on one player to get you a goal,’ Dixon told the Handbrake Off podcast. ‘No goals from anywhere else, although Lacazette has three in six he seems to have gone off the boil.


‘No goals from midfield at all. No breaking midfield player that forces teams back like a Mason Mount or somebody running through the middle like that and breaking into the box.

‘So, already the way that you can play with that, and I haven’t even mentioned the back four or five, then you’re limited in what you can achieve.’


Arsenal were linked with Lyon midfielder Houssem Aouar in the summer window, who Dixon also feels would be an answer for their struggles this season.

‘You’ve got to chip away at those little things,’ said the England international. ‘Does he want those types of players? Where’s the creativity in midfield? A player like Aouar would’ve been somebody that would’ve helped.’

Sun Nov 15 , 2020
Manchester United defender Alex Telles could miss Brazil’s game against Uruguay on Tuesday after he tested positive for coronavirus for a second time. Telles had first tested positive for the virus at the end of October and has already missed four matches for the Red devils as a result. The […] 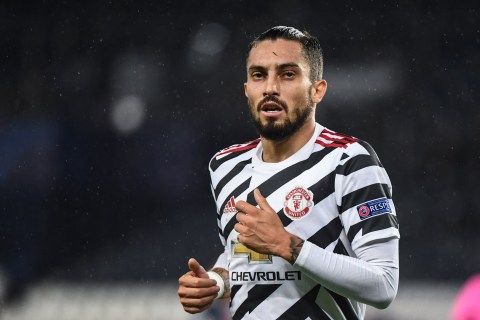