Arsenal striker Pierre-Emerick Aubameyang admitted that some Arsenal players felt resigned to after the 3-0 loss to Manchester City on Thursday night.

The Gabon international missed a penalty against City in the second-half and also had another quiet game for Arsenal, Aubameyang had also struggled in the Carabao Cup final on Sunday which they lost 3-0 to City.

“There’s a lot of disappointment,” The Gabon international told SFR Sport. “I think that this evening it was a match without anything positive.

“We’re not happy with our performance, whether it be Sunday or tonight. As we weren’t able to score the goal that might have pushed us forward, we know very well that City play very well.


“They’re perhaps the best team in terms of playing style in the world right now, so of course, it’s not easy when you can’t score that goal, you need to have that extra energy. So, perhaps there were some players who were a bit resigned.”

The loss leaves Arsenal 10 points off fourth place in the Premier League, meaning they might have to settle for another season in the Europa League — which could be their only hope of getting back into the Champions League next season.

“The Europa League is a good option to qualify for the Champions League,” Aubameyang said.

“We know very well that the path isn’t an easy one. Ten points off fourth place, it’s going to be very tough. But we’re going to battle to the end, the league isn’t over. Anything can happen in the Premier League.”


Aaron Ramsey however refused to give up on Arsenal’s top-four chances, but said the Gunners were beaten by the better side.

“It was one of those games where it felt like we were in the game, but they punished us with three quality moves,” Ramsey told Arsenal’s official website.

“That’s the difference at the end of the day and they’re top of the league for that reason. They punish teams so the game was over in the first half.

“There’s so much to play for, so hopefully we can win all our remaining games. It’ll be tough but that’s what we have to do.


“Hopefully we can finish in the top four with the Europa League trophy as well. Considering the situation that we’re in at the moment, that would be a very successful season for us.”

Fri Mar 2 , 2018
Antonio Conte has once again hinted at dissatisfaction with Chelsea’s transfer policy ahead of trip to Premier League leaders Manchester City on Sunday. Asked why Manchester City had been able to forge clear of last season’s champions, Conte cited Guardiola’s relationship with the club’s owners and the provision to spend […] 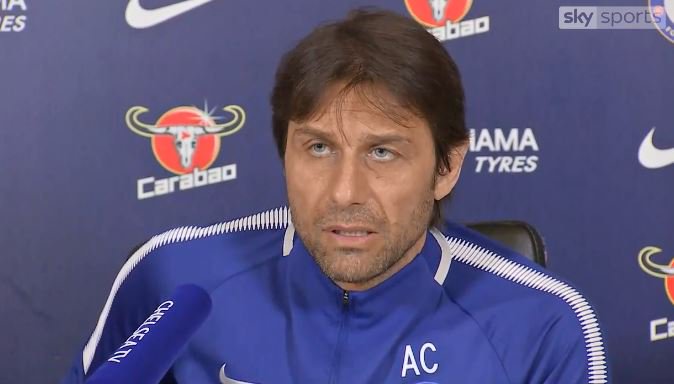