Ole Gunnar Solskjaer has praised Manchester United’s defence for keeping a clean sheet though says he has spoken to Eric Bailly about his sloppiness at the start of the game.

The only goal of the game came from Marcus Rashford after just nine minutes to secure a 1-0 win against Leicester City on Sunday, keeping their first clean sheet in four matches.


Bailly came back into the starting lineup, partnering Victor Lindelof, and Solskjaer was happy with how they played despite not starting well.

‘Fantastic to have a clean sheet and they played well against Arsenal together too,’ said Solskjaer when asked about Bailly and Lindelof’s partnership.

‘Today I thought we started a little bit sloppy, Eric knows, but they really came good.’

On the clean sheet, he continued: ‘It’s the first one in a while. We’ve had three games now, Burnley, Brighton, Arsenal, where we’ve conceded after a couple of clean sheets.


‘But that of course is very important for us, because when you’ve got players like Rashford, Pogba, Martial, Sanchez, all them quick ones up top, you’ve got a great chance of winning the game.

‘That’s the foundation, with a proper solid defensive performance, and the keeper of course. Two fantastic saves today as well so he’s kept us in it.’

Lindelof was also happy with his partnership with Bailly, saying: ‘I think we controlled it very well. Me and Eric spoke before the game and said we had to be ready.


‘If we don’t have pressure on the ball we have to kill the space and [Vardy] didn’t have a lot of chances today and he didn’t get in behind so I’m very pleased with the way me and Eric controlled it.’

Sarri: I've never coached a team as inconsistent as Chelsea

Mon Feb 4 , 2019
Maurizio Sarri concedes he has never coached a team as inconsistent as Chelsea as he prepares for a run of games that could define their campaign. Chelsea provided an outstanding response to Wednesday’s humiliating 4-0 loss against Bournemouth by beating Huddersfield Town 5-0 at Stamford Bridge, with Gonzalo Higuain scoring […] 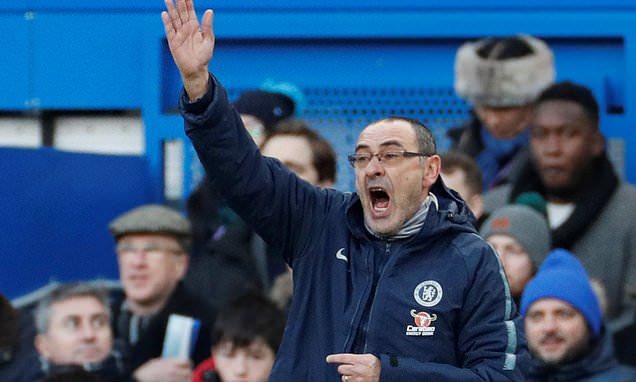