Kevin De Bruyne has revealed how Jose Mourinho made an attempt to belittle his performances during a meeting which led to the his Chelsea exit.

Having impressed during a season-long loan spell at Werder Bremen, De Bruyne looked set to fight for a first-team place at Chelsea after returning to the club in the summer of 2013.


De Bruyne was handed his Chelsea debut by Mourinho on the first game of the Premier League season and the Belgian provided an assist in a 2-0 victory over Hull City.

But the Belgium international was then overlooked by Mourinho for the majority of Chelsea’s Premier League matches and played just nine first-team games in all competitions by December 17.

De Bruyne admits he was ready to leave Chelsea because of his lack of playing time but reveals how Mourinho attempted to negatively compare his statistics with his teammates.

‘Jose called me into his office in December, and it was probably the second big life-changing moment for me,’ De Bruyne told The Players’ Tribune.


‘He had some papers in front of him, and he said, ‘One assist. Zero goals. Ten recoveries.’
‘It took me a minute to understand what he was doing.

‘Then he started reading the stats of the other attacking forwards – Willian, Oscar, Mata, Schurrle.

‘And it’s like – five goals, 10 assists, whatever.
‘Jose was just kind of waiting for me to say something, and finally I said, ‘But … some of these guys have played 15, 20 games. I’ve only played three. So it’s going to be different, no?’

‘It was so strange. We had a bit of a conversation about me going back out on loan. And Mata was also out of favor at the time, so Jose said, ‘Well, you know, if Mata leaves, then you will be the fifth choice instead of sixth.’

‘I was completely honest. I said, ‘I feel like the club doesn’t really want me here. I want to play football. I’d rather you sell me.’


‘I think Jose was a bit disappointed, but to be fair to him, I think he also understood that I absolutely needed to play.

‘So the club ended up selling me, and there was no big problem at all.

‘Chelsea got more than double the price they paid for me, and I got into a much better situation at Wolfsburg.’

De Bruyne continued: “When I came back to Chelsea the next summer, a few German clubs wanted to sign me.

“[Jurgen] Klopp wanted me to come to Borussia Dortmund, and they played the kind of football that I enjoy.

“So I thought maybe Chelsea would let me go.
“But then Mourinho texted me: ‘You are staying. I want you to be part of this team’.”

Mon Apr 15 , 2019
Jurgen Klopp has started the mind games in the Premier League title race by saying he expects Manchester City to win every game they have left. The Reds sit two points above their rivals with four matches left to play but Pep Guardiola’s side still have a game in hand. […] 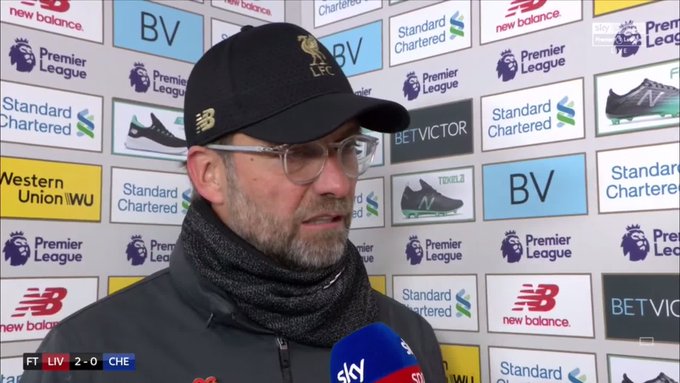