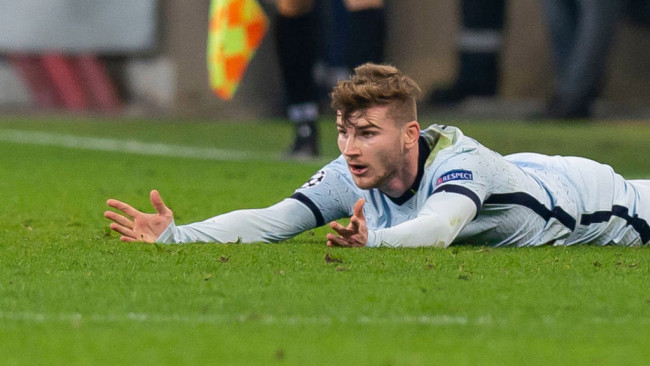 Rio Ferdinand has criticised Timo Werner’s display in Chelsea’s win over Atletico Madrid in the Champions League while Joe Cole compared the striker to ‘a young Theo Walcott’.

Chelsea secured a very important win over the La Liga leaders on Tuesday, winning 1-0 in the first leg of their round of 16 game thanks to a wonderful bicycle kick from Olivier Giroud.


Werner had a tough night, wasting several good chances to give Chelsea a bigger margin of victory, and Ferdinand was unimpressed with his performance.

‘It’s just frustrating watching him because you’ve seen clips of him and you’ve seen what he can do,’ said the former Manchester United defender on BT Sport.

‘I feel like [his first-half miss] is not an easy chance but you’d like to see him get it on target and get a better connection on the ball.

‘But he just frustrates you. There are far too many times where he’s too loose in possession when building up or decision-making when he gets into [dangerous] areas.


‘Sometimes fast players sometimes have to slow the game down in their mind. They’re running so fast everything else is a blur, and that’s maybe how he seems at the moment.’

Cole chimed in at this point and compared Werner’s display to those of a Walcott during his early days at Arsenal, who struggled to marry his blistering pace with a clinical edge in front of goal.


‘It was like a young Theo Walcott, wasn’t it?’ said the former Chelsea man.

‘When you used to watch Theo play he was so exciting, so much talent, but it wasn’t until the latter stages of his career when he put it all together and started scoring more goals regularly.

‘We mustn’t – and we’re not – going to give up on Timo Werner, it’s early days and there is so much scope there because he has got some natural, raw ability.

2 months ago
Thomas Tuchel concedes he made a mistake over Olivier Giroud after Chelsea’s 1-0 victory over Atletico Madrid in the Champions League on Tuesday. The Frenchman scored an outstanding overhead kick in the second half to secure a 1-0 win against Diego Simeone’s side in Bucharest. Giroud started the Champions League […]