Former Barcelona forward Samuel Eto’o has accused Pep Guardiola of not understanding the squad despite leading them to their first treble in the 2008-09 campaign.

Eto’o had a fall-out with the head coach and found regular playing time limited with Guardiola deciding to field a young Lionel Messi in what turned out to be his last campaign at the club.


Despite the manager’s preference, the ex-Cameroon international ended the season as Barca’s top scorer in La Liga with 30 goals and also netted the opener in their 2-0 defeat of Manchester United in the 2009 Champions League final.

While recalling his relationship with the present Manchester City manager, Eto’o revealed that he forced the Catalan to plead for forgiveness with his match-winning performances.

“Pep has lived his whole life in Barcelona, but in the years I spent in Barcelona, he didn’t understand the squad. He didn’t live the life of our group,” Eto’o told beIN Sport .

“I said to Guardiola, you’ll apologise to me, because it’s me that will make Barcelona win, it’s not Messi.

“It was the situation back then. Messi would come later, but you can ask Xavi, Iniesta and others, that was my era.


“It was me that made Barca win, and Pep would ask me for forgiveness.”

After Barcelona’s historic treble win in the 2008-09 campaign, Eto’o was dropped for a swap deal which involved Zlatan Ibrahimovic and later made a transfer to Inter Milan in July 2009 where he won another treble with the club in his debut season.

The move, according to the 38-year-old was the ‘best deal in football history’ as he went ahead to score 53 goals in 89 matches for Inter Milan.

“My lawyer at the time told me that the club had put me up for sale on the transfer market. I said really? He said yes, at Guardiola’s request,” he continued.

“It’s clear today, that move, and the opportunity that Pep gave me has gone down in history because it permitted me to be an even bigger part of football history by going to Inter. He allowed Inter to strike the best deal in football history.”


After spells at Barcelona and Inter Milan, the four-time African Footballer of the Year has since played for Anzhi Makhachkala, Chelsea, Everton, Sampdoria, Antalyaspor, Konyaspor and currently plays at Qatar SC where he has scored five goals in 16 games in the Qatar Stars League.

Thu Apr 11 , 2019
Bayern Munich forward Robert Lewandowski reportedly had a punch-up in training session with team-mate Kingsley Coman. The German club are preparing for another big game in the title run-in when they play Fortuna Dusseldorf this weekend. But their plans have been thrown into disarray after two of their players decided […] 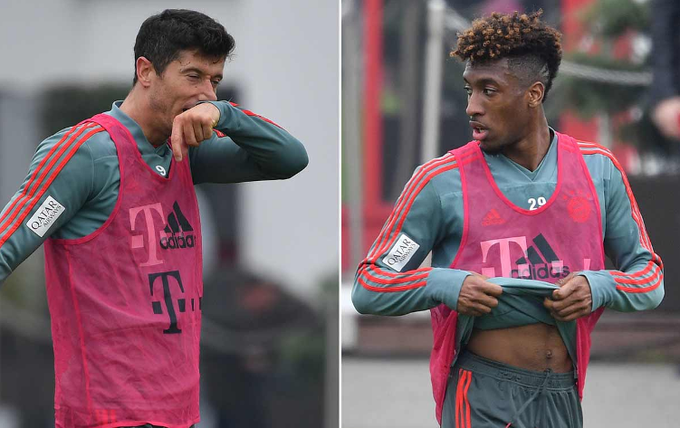