Ralf Rangnick is desperate to bring Erling Haaland to Manchester United and has already held discussions with the player’s father, according to the Manchester Evening News.

The Borussia Dortmund star came close to joining the Red devils before his move to the Bundesliga, with Ole Gunnar Solskjaer disappointed to miss out on him on that occasion.


Since joining Dortmund, Haaland has continued to enhance his reputation as one of the best forwards in world football, scoring an outstanding 76 goals in just 74 matches.

Haaland’s release clause, which will enable potential suitors to sign him for only £63.8m becomes active at the end of the campaign and it is looking likely he will leave Dortmund.


His situation has every major club in Europe on red alert, well aware they could land a generational talent at what would represent a huge bargain.

Rangnick, who will take on a two-year consultancy role at United from next summer, has retained a relationship with Erling’s dad Alf-Inge, after the player’s time at RB Salzburg.

The 63-year-old helped Haaland seal his move to the Bundesliga club and he is now hoping his previous with Alf-Inge could give United an edge in the race.

According to MEN, Rangnick has been in touch with Haaland Snr. with the Red devils making the signing of a new striker a priority in 2022.


In his introductory press conference, Rangnick was forced to dismiss suggestions that his contract included a bonus clause if he can lure Haaland to the club.

He said: “£10m for Haaland, £10m for Kylian Mbappé, £10m for Lewandowski, and £10m for Joshua Kimmich… Obviously, it’s nonsense. There’s no clause in my contract.

“I know what kind of player he [Erling Haaland] is — the whole world has realised how good the player is. The offensive players we have here, we have so many top players in the offensive department that we don’t need to speak about any other player.”

But he spoke about his admiration for the Norwegian international, adding: “Erling Haaland is a fantastic striker. I know best myself, because I was together with the people at Salzburg with my friend Kristoff and the people there were a little bit involved in the move from Molde to Salzburg, and therefore I know what kind of player he is.”

Wed Dec 22 , 2021
Benfica are open to taking Manchester United centre back Phil Jones on loan in the January transfer window, according to reports. Jones has played 165 Premier League matches for United since his arrival back in 2011, including 17 times during the 2012/12 title-winning campaign under Sir Alex Ferguson. But, the […] 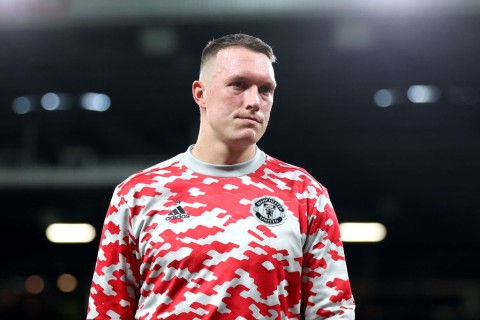