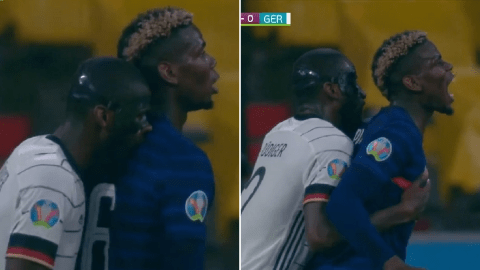 There were bizarre scenes at the end of the first half of France’s Euro 2020 match with Germany as Antonio Rudiger appeared to bite Paul Pogba’s back.

The World Cup holders took a 1-0 lead in Tuesday’s huge clash in Munich courtesy of an own goal from Mats Hummels, with the hosts struggling to break down France’s defence and looking very vulnerable on the break.


Rudiger appeared to show his frustration before the break, trying to take a chomp out of Pogba as the two Premier League players tussled.

The Frenchman gave a scream and appealed to the referee, but the incident was not looked at further by VAR and Rudiger was able to escape unpunished.

‘When you see Pogba’s reaction, it felt like a bite,’ said Patrick Vieira on ITV Sport during the break. ‘But I don’t really understand what he was trying to do there really.’

Roy Keane chimed in: ‘I think it was more of a nibble than a bite. It wasn’t a proper bite was it? Silly thing to do though obviously.’


The then Liverpool striker was given a four-month ban for his actions, though it was the third time he had bitten an opponent and Rudiger is very unlikely to face such punishment if the incident is reviewed again after the game.

Before the game, Rudiger had said Germany needed to ‘be a little dirty’ in order to stop France, but seemed to go overboard with his use of the dark arts.

Pogba speaks out on Rudiger bite after France beat Germany

2 months ago
Paul Pogba has played down Antonio Rudiger’s bite after France’s 1-0 victory over Germany at Euro 2020 and has called on UEFA to not suspend the defender over the incident. France made a good start to their Euro 2020 campaign as Mats Hummel’s first-half own goal sealed a win at the Allianz Arena. […] 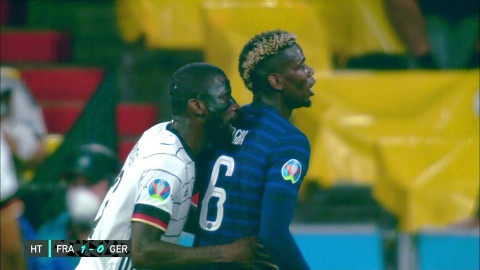