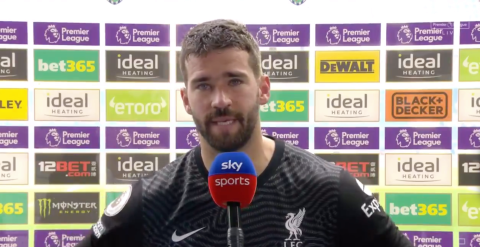 An emotional Liverpool keeper Alisson Becker dedicated his dramatic winner for Klopp’s side against West Brom to his late father.

The Brazil international produced a moment of magic when he nodded in a late goal to keep his side’s hopes of reaching the top four intact.


With the scores level at 1-1 deep in the last minute of stoppage time, the goalie came up for a corner – the last kick of the match – and headed in to give Liverpool an incredible win.

It was his first ever goal in his career, and it proved to be a vital one as it moved the Reds to within one point of fourth-placed Chelsea with just two matches left to play this campaign.

In an emotional post-match interview, Alisson spoke about the awful time he has been through after losing his father Jose in February when he drowned in Brazil, as he dedicated the goal to his dad and Liverpool team-mates.

‘I’m too emotional, these last months for everything that happened with me, my family,’ he told Sky Sports.


‘But football is my life, I play since I remember as a human being with my father, I hope he was here to see it, but I’m sure that he’s seen with God on his side and celebrating.

‘It’s for my family, for the boys. What a fight, sometimes we’re fighting, fighting and things are not happening. ‘This afternoon here, just scoring this goal I’m really happy to help them because we fight a lot together and we have a strong goal to achieve the Champions League.


‘We won it once and everything starts with qualification so I can’t be more happy than I am now. I’ve been away from interviews for a long time,’ he added.

‘It was a difficult time because always when I talk about it I get emotional but I really want to thank all of you, the Premier League, all the players.

‘I received letters from managers, from teams for example Everton, Ancelotti, all the players, Man City, Chelsea, I don’t want to be not fair to the others that I don’t remember, but I just want to say thank you everybody for the support from the team. If it wasn’t for you I could never get through this because I’m just away from my family since the thing happened, my mother, my wife have been amazing with me, my kids give me energy.

‘This is why we feel the love from God, this is the way God loves us, through people. ‘It should do that every time, every day and I just want to say thank you in this moment.

‘The celebration, I don’t know how to celebrate and hopefully I won’t have to come so many times to the box to score a goal, hopefully our players will do that for me. I just have to think of the fans and help them.’

Mon May 17 , 2021
Manchester United playmaker Bruno Fernandes has joked he would have been a Ballon d’Or winner if he had the pace of Marcus Rashford. Fernandes has been of the Premier League’s best players this campaign, continuing the form that made him a cult-hero at Old Trafford after joining from Sporting last January. The […] 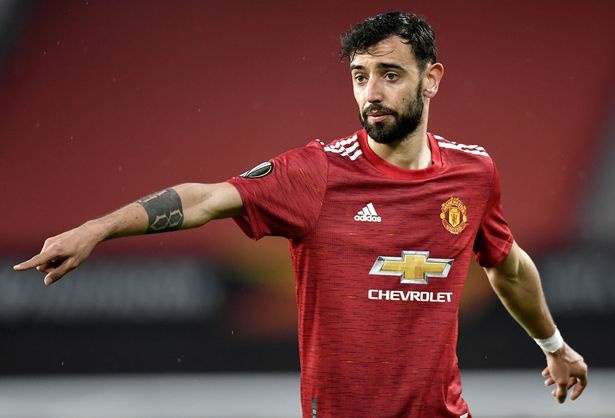