Suarez, who scored Barca’s third goal with an incredible solo run and finish, was hurt towards the end of Sunday’s win, in which Lionel Messi scored a glorious hat-trick.


Barca said in a statement released on social media that Suarez will undergo tests on Monday to know the extent of his injury, with the striker unlikely to join Uruguay on international duty.

Suarez’s strike against Betis was his 128th goal in La Liga, drawing him level with former Atletico Madrid forward Diego Forlan as the most prolific Uruguayan player in the league’s history.

Ernesto Valverde is already without Ousmane Dembele for both legs of their upcoming
Champions League quarter-final matches against Manchester United.


Dembele suffered a hamstring tear as a Messi helped Barca beat Lyon 5-1 at Camp Nou this week to book the next round for a record 12th year in succession.

Barca return to action after the international break with a Catalan derby at home to Espanyol on March 30, while Atletico Madrid, who are 10 points behind, visit Barcelona a week later.

The first leg of the quarter-final against Premier League team United is scheduled for April 10 at Old Trafford, with the return match set to be played the following week.

Sarri reveals who is to blame for Chelsea defeat against Everton

Mon Mar 18 , 2019
Maurizio Sarri chose to absolve himself of blame for Chelsea’s defeat to Everton and instead pointed the finger at the players for switching off. The Blues appeared in complete control in the first half, missing a couple of good chances, but were off the pace after the half-time break and […] 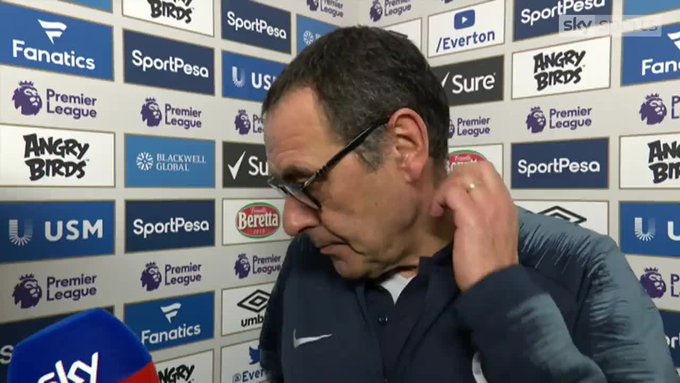