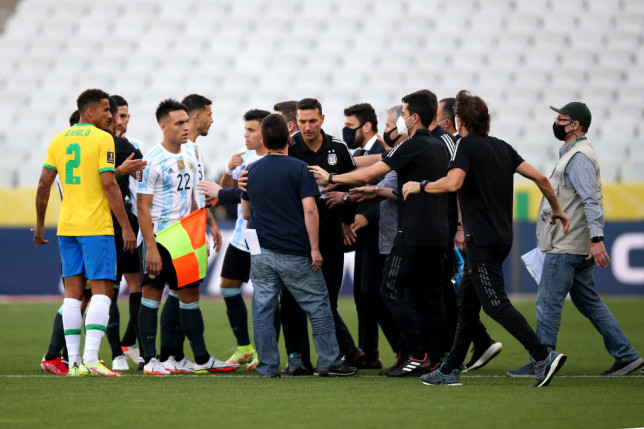 There were crazy scenes during the Brazil v Argentina World Cup qualifier in Sao Pauo on Sunday as health officials came onto the pitch in order to detain four Argentina players.

The Brazilian authorities say that four Argentina players – Cristian Romero, Giovani Lo Celso, Emiliano Martinez and Emi Buendia – have breached quarantine rules and should have quarantined when they arrived in Brazil due to Covid protocols.


They also claim that the Argentinians did not reveal the four men had been in the UK in the last 14 days, which would have meant they had to quarantine for 14 days, giving false information to avoid it. However, Argentina believe that they have been in the CONMEBOL bubble, which means they did not have to comply to the rules.

The situation was known before the game, with Brazil’s health authority Anvisa even releasing a statement.


Anvisa’s statement read: ‘Anvisa considers the situation a serious health risk and so has asked local health authorities to determine the immediate quarantine of the players, who are stopped from participating in any activity and should be prevented from remaining on Brazilian soil.’

Martinez, Lo Celso and Romero were all starting for Argentina in Sao Paulo after CONMEBOL and FIFA had spoken to Brazilian health authorities and it was believed they could proceed with the match.

Travel within South America for elite sports people is allowed, but Brazilian authorities did not want people travelling from the UK to be involved.

After only five minutes, with some tackles flying between the old rivals, the game came to a halt as a number of officials were on the side of the pitch.


They then entered the field and the Argentine players were told to leave the pitch after a small scuffle, while the Brazilians stayed on the field.

The majority of the Argentina players returned to the dressing room quickly, with the rest following.

CONMEBOL tweeted: ‘By decision of the match referee, the match organized by FIFA between Brazil and Argentina for the World Cup Qualifiers is suspended.’

Argentina manager Lionel Scaloni said: ‘It makes me very sad. I’m not looking for any culprits. Whether or not something happened, it was not the time to make that intervention.

‘It should have been a party for everyone, to enjoy the best players in the world. I would like the people of Argentina to understand that as a coach I have to defend my players.

‘At no time were we notified that they could not play the match. We wanted to play the game, the players from Brazil too.’

Antonio Conte's agent speaks out on agreement with Arsenal

3 weeks ago
Federico Pastorello, an agent close to Antonio Conte, has rejected reports that Arsenal have reached an agreement with the manager. Mikel Arteta finds himself under huge pressure after a woeful start to the Premier League season, with bottom-of-the-table Arsenal losing all three of their opening games without scoring a single goal. Arsene Wenger was […] 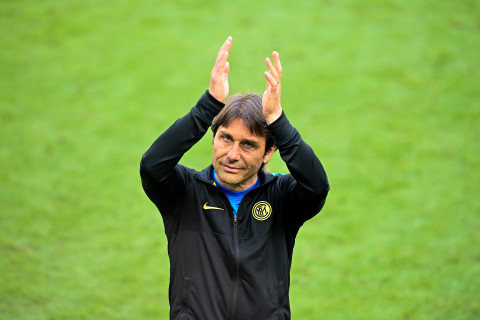