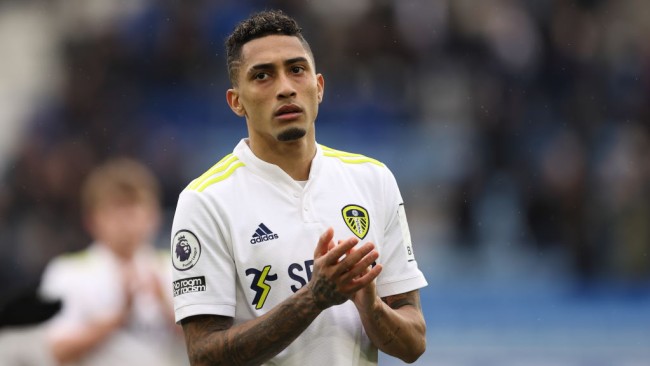 Barcelona are ready to make an offer worth up to £60million for Raphinha that could end Chelsea’s hopes of signing the Leeds United winger.

Chelsea appeared to finally be on the brink of signing the Brazil international after agreeing a fee of £55m rising to £60m with Leeds on Monday.


Arsenal had also been hopeful of signing the winger but Chelsea’s far superior offer left them leading the race for his signature.

While Raphinha is open to a transfer move to Stamford Bridge, his first choice has always been a move to Barcelona.


But with the Catalan club under financial pressure, they have so far been unable to make an offer that meets Leeds’ demands.

But, The Times now claim Barcelona are now ready to launch an offer worth £51m up front with a further £9m to follow in add-ons.

Barcelona are now hopeful of getting the deal done – with Raphinha’s desire to move to the Camo Nou a major factor.


Barcelona are in a position where they can fund fund the move after agreeing a deal on Thursday to sell 10 per cent of their La Liga TV rights for the next 24 years – a move that will see them net an initial figure of £179m.

While Barcelona is Raphinha’s preferred destination, the report claims there is also interest from an unnamed European team who are competing in next season’s Champions League.

Mikel Arteta’s side saw a bid of £35m rejected by Leeds last week.

Raphinha 'refusing to negotiate deal' with Chelsea despite agreement with Leeds

7 months ago
Chelsea’s hopes of signing Raphinha appear to be fading after the Leeds United star instructed his agent to tell the Blues to cool their interest. Barcelona have always been the Brazilian star’s preferred destination this summer, but the financial strife the La Liga giants find themselves in opened the door […]