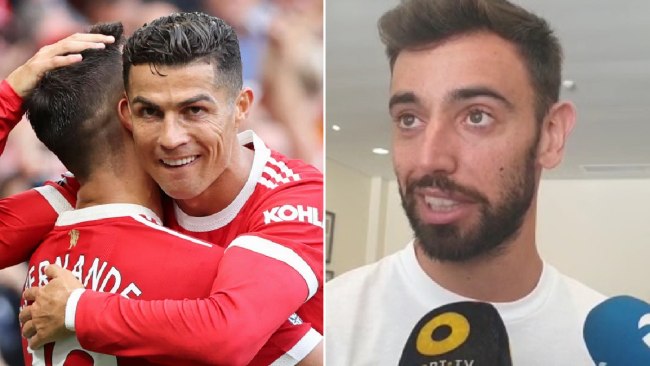 Bruno Fernandes fully expects Cristiano Ronaldo to remain at Manchester United this summer despite speculation linking him with a move away.

Both Roma and Sporting Lisbon are rumoured to be keen on signing the 37-year-old, while David Beckham’s Inter Miami and even Chelsea co-owner Todd Boehly are reported to have held discussions with Ronaldo’s agent, Jorge Mendes.


The Portuguese star is said to be growing impatient with United’s lack of transfer activity so far this summer – they are yet to make a signing – while there are also question marks over his suitability to Erik ten Hag’s style of play.

But Fernandes says his compatriot has not given any indication that he is thinking about leaving the club and expects to see him next week for pre-season training.


Asked about Ronaldo’s future, Fernandes told reporters in Portugal: ‘Now we’re both on vacation and nobody bothers their friends on vacation.

‘What I hope is that Cristiano will be there [at United’s training ground] with me on Monday. He’s one of those who will come back later because of the national team’s games and I’m not waiting for anything more than that.

‘As far as I know there is nothing more than that, but everyone knows their future. I don’t believe the club is willing to lose a value like Cristiano.’

Fernandes, who was speaking at an event in which he became an ambassador of the Portuguese Teqball Federation, was asked if he could envisage seeing Ronaldo return to Sporting in the future.


He added: ‘I don’t know, but for the Sporting fans it would be a great moment, almost everyone would like that to happen, but it depends on what Cristiano expects for his future.

‘He has the ambition to continue playing for many years to come and we’ll see what he decides. ‘I think it’s a dream for most Sporting fans to see Cristiano wearing a Sporting shirt playing in Alvalade.’

7 months ago
Chelsea have been given fresh hope of signing their main defensive transfer target Matthijs de Ligt. The Netherlands international signed for Juventus from Ajax three years ago, amid much fanfare, but he has largely failed to live up to expectations and justify his £67.8m fee. De Ligt is believed to […]