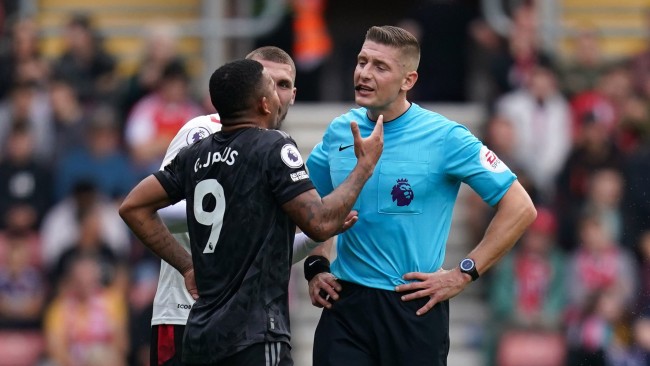 Gabriel Jesus said that referee Robert Jones told him he needed to fall to the ground in order to get a penalty in Arsenal’s 1-1 draw with Southampton on Sunday.

The Gunners lost ground at the top of the Premier League as Granit Xhaka’s early opener was cancelled out by Stuart Armstrong’s second-half goal.


But Arsenal felt they should have been awarded a penalty in the first half of the match after Duje Caleta-Car held back Jesus inside Southampton’s area.

Jesus tried staying on his feet during the move and the Brazilian forward claims that went against him when the referee made the call not to penalise Caleta-Car.

‘I don’t like to talk about the referee’s decisions, I just want to talk about our performance but sometimes it can change the game,’ Jesus told Arsenal’s official website.

‘I spoke with him straight after and he said. ‘if you go down before maybe I can give a penalty’.


‘But I think I was fair. I tried to hold, tried to keep standing, tried to finish the action but at the end he grabbed me and it was impossible, so I go down normally.

‘But that is not the reason why we didn’t win the game. We had a lot of chances, we could’ve scored three chances in the first half, in the second half we had some chances, me as well.


‘Like I said, what is in control is our game, our basics, we’ll try to rest now because Thursday we have another one and we’ll come back strong.’

3 months ago
The form of Chelsea shot-stopper Kepa Arrizabalaga is “great proof” that sacking Thomas Tuchel was correct, according to Manchester United legend Peter Schmeichel. Kepa produced another superb display as Chelsea drew 1-1 against United on Saturday with the Blues remaining unbeaten under Graham Potter. It looked likely that Kepa would […]