Chelsea forward Eden Hazard has been left out of Chelsea’s squad for their Europa League trip to PAOK.

Maurizio Sarri indicated he could rest the Belgian after he scoring a hat-trick in Saturday’s Premier League win over Cardiff City at Stamford Bridge.

And Hazard is the main absentee from the 21-man travelling party for Thursday’s game against the Greek side.


David Luiz, Mateo Kovacic and Emerson Palmieri have also been left out of the Blues squad for their game against PAOK.

Chelsea have won all five of their Premier League matches under the Italian ahead of their Europa League match, Although they had to come from behind to down Cardiff 4-1 on saturday, with Hazard’s hat-trick enough to turn the game around.

After the win, Sarri agreed with suggestions that Hazard might now be the best player in Europe.

“I thought Hazard was one of the best players in Europe, but now I am changing my mind that he is the best,” he told reporters.

“I think Hazard can improve more. I think that he can spend less energy than now at 50 or 60 metres to the opposite goal.


“When we have the ball in our half he touches the ball five times or six times. So his actions, it shows he spends a lot of energies, and can have more energy in the last 25 metres. I think he can score 30 or 35 goals.

“I have spoken to him in the last two days, yesterday I told him for me he can score 40 goals. But spend less energy far from the goal and play in the last 25 metres.”

Fri Sep 21 , 2018
Maurizio Sarri has calmed fears over Pedro after the winger suffered an injury to his shoulder at the end of Chelsea’s 1-0 victory over PAOK in the Europa League. Pedro was brought down in second-half injury time on Thursday, and seemed to have dislocated his shoulder as he left the […] 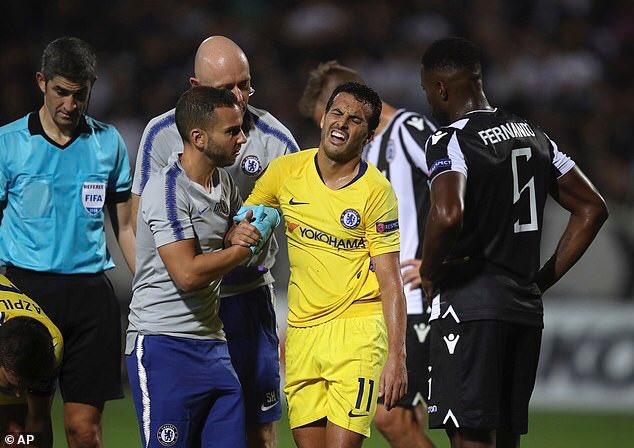