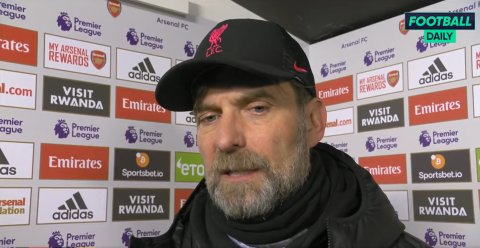 In-form Brazilian attacker Martinelli was a constant threat for Arsenal but England right-back Alexander-Arnold more than held his own.


The Gunners impressed in the first half and should have taken the lead after the break when Thiago Alcantara gave the ball away in a dangerous position.

However, Martinelli decided to pass to Martin Odegaard rather than take on Liverpool’s Alisson Becker and the goalkeeper denied the playmaker superbly.


Liverpool impressed after and two goals within eight minutes from Diogo Jota and Roberto Firmino secured all three points for Klopp’s title-chasing side.

The Reds manager said: ‘Obviously both teams had spells of possession where the other team was patient and didn’t want to step out, but we had to.

‘Trent [Alexander-Arnold] did exceptionally well against Gabriel Martinelli. If anybody tells me Trent can’t defend, I’ll knock them down. I don’t know what the boy has to do anymore.’

Klopp added: ‘In the first half we didn’t have enough players between the lines. The movement was not exactly what it should have been.


‘It was not a big problem because we were prepared for a really difficult game. The speed Arsenal have and their physicality – they’re a really talented team, so I wasn’t angry at half-time. I just wanted to change a few things.

‘It was a sensational save from Alisson [before the opener]. For me it was a goal, to be honest. With their quality, they often finish situations like that.

‘Ali didn’t let it happen. When you always try to find a football solution like Thiago – I would have kicked the ball into the stand probably. He tried to keep it in the game.’

While Mikel Arteta was disappointed by the defeat, he was ‘proud’ that the Gunners went ‘toe-to-toe’ with Liverpool for most of the game and threatened to deal a blow to their title aspirations.


‘From box-to-box we were at the right level but in the boxes that’s where they won it,’ Arteta said. ‘They had two big chances and scored.

‘We didn’t. For the rest, we went toe-to-toe with one of the best teams in the league right now.

‘Everything. It was everything we talked about, the quality of it, the mentality, the intensity and the courage. Unfortunately the result did not agree with the performance.

‘I want to win every football game but I am very proud of the boys and the performance and the connection with the fans, they stayed with the players until the end.’

4 months ago
Chelsea supporters clashed with French riot police ahead of last night’s Champions League 2-1 victory in Lille. The crisis-hit Premier League side advanced to the quarter finals after a 4-1 aggregate win over Lille, but the game was largely overshadowed by the trouble that preceded it. Gendarmes in full riot […] 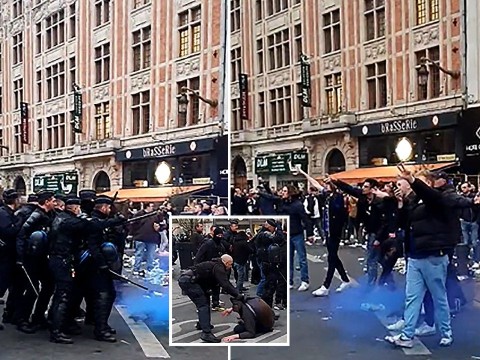