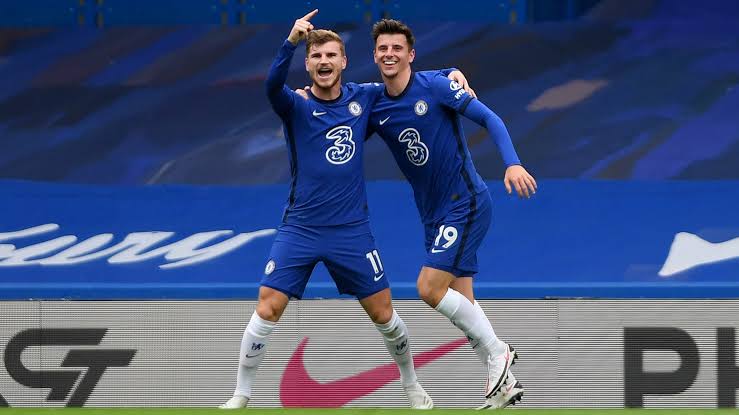 Mason Mount has revealed what he told Timo Werner after the striker missed a big chance in the first half of Chelsea’s 2-0 victory over Newcastle.

Werner had an effort saved by Newcastle keeper Karl Darlow before missing another opportunity as Chelsea failed to add to the early own-goal in the first half at St James’ Park.


Werner’s frustrations continued after the break as he misjudged the weight of his pass to Hakim Ziyech when running through on goal.

But Werner put his missed chances behind him with a solo run to set up Tammy Abraham, who scored from close range to double the blues’ lead and put the game beyond Newcastle’s reach.

Reflecting on Werner’s miss in the 30th minute, Mount told Chelsea’s official website: ‘I said to Timo in the first half, “That’s a goal for you, you need to score them” because I’ve seen them go in day-in and day-out in training.

‘He’s a top player and he needs to be harsh on himself to score those. He knows that and, if it comes next week, he’ll put it away.


‘I was disappointed with my one as well because I feel I should be scoring those. We’re all tough on each other and tough on ourselves because we want to be pushing to get number one.

‘We need to have that in the group where if someone doesn’t score or makes a mistake, we can tell them. Chelsea teams in the past had that in their group and we need the same in our group. If we do, we’ll have a top chance of winning trophies.’


Mount added: ‘It’s a massive win. We know from last season how difficult it is to come here and get a result.

‘Without the fans it might be a bit easier coming to places like this to get results because the fans here obviously had a big impact on them last season, it was a tight game.

‘But the way we’re playing at the moment, we’re confident in getting the result which last season maybe we didn’t have.

‘We’re building momentum but we can’t get too carried away. ‘We just need to keep focussing on winning games, scoring goals and trying to keep as many clean sheets as we can.’

5 months ago
Mason Mount is confident Chelsea can mount a serious and sustained title challenge this season but says he and his teammates cannot afford to get too ‘carried away’ at such an early stage of the campaign. Chelsea are unbeaten in their last nine matches in all competitions and currently sit […]