Jose Mourinho has highlighted the investment made in Manchester City and Liverpool’s squads in a dig at Manchester United’s transfer policy during his time at the club.

Although United splashed out £89 million on Paul Pogba and £75m on Romelu Lukaku during his time in charge, Mourinho was left frustrated by what he perceived to be a lack of backing in the market.


United have won seven games out of seven since Mourinho’s sacking , with Ole Gunnar Solskjaer having a perfect record during his time as interim replacement.

But Mourinho used an appearance as a television pundit on beIN SPORTS on Saturday to discuss the spending lavished on Pep Guardiola and Jurgen Klopp’s teams.

“In the first season, Guardiola was not champion and it was really difficult, people were expecting a winning Manchester City,” he said. “They were coming already from a winning period, they were champions with [Roberto] Mancini and [Manuel] Pellegrini.

“Some of the players were champions twice – [Sergio] Aguero, [Vincent] Kompany, lots of them. And in the second season, Pep made great decisions but great decisions that were supported.

“He got [Kyle] Walker, Danilo, [Benjamin] Mendy and I don’t remember, [Oleksandr] Zinchenko or [Fabian] Delph or something. He was supported. You see Liverpool [playing on Saturday], and I was thinking how many of these players were at Liverpool before Jurgen arrived?

“No Alisson. No [Virgil] van Dijk. No [Andy] Robertson. No [Mohamed] Salah. No [Roberto] Firmino. No [Sadio] Mane. No Fabinho. No [Georginio] Wijnaldum – I don’t think he played today [against Crystal Palace] – no Wijnaldum. No [Naby] Keita – this is work in depth.

“The other day I was speaking about the leadership in relation to the structure of the club. It’s not just the leadership, it’s everything, it’s even the football ideas.

“So if you are a manager and if you have in your hands the ability to choose the players who follow your football identity, or follow the idea that you think is the best to win a certain competition, that’s one thing. Another thing is if you are not able to do that.”

Mourinho drew a comparison with the way he was backed financially on his arrival to Chelsea , where he won the title in each of his first two years in charge at the club.


“We go there as underdogs,” Mourinho added. “But Chelsea was burning with the incredible desire of Mr [Roman] Abramovich after buying the club and after having some good things, finishing second or third, reaching the Champions League semi-finals with Mr [Claudio] Ranieri.

“Chelsea was burning with a big desire to win it [the title]. And like I like to say about Liverpool this season, they go direct to the [transfer] target. Liverpool need a goalkeeper – Alisson, bang. Liverpool went exactly where they need to go.

“We were fantastic in the market. Mr Abramovich was in big love with football and the club. Peter Kenyon [chief executive] was an amazing CEO to work with, amazing, I came with clear ideas and we followed everything.

“We need a striker, lots of strikers were in Europe – come to Chelsea, don’t come to Chelsea – [Didier] Drogba from Marseille, African, nobody knows Drogba. We went direct to the target. Before, Peter Kenyon, structure working really well – Petr Cech, Arjen Robben, Claude Makelele. We did a fantastic team.

Mon Jan 21 , 2019
Kevin-Prince Boateng has confirmed his shock transfer to Barcelona, announcing that he is coming to the club, and hopes he can score against Real Madrid. Goal reported earlier Monday that the attacker was on the verge of a surprise transfer from Sassuolo , who he joined this past summer, to […] 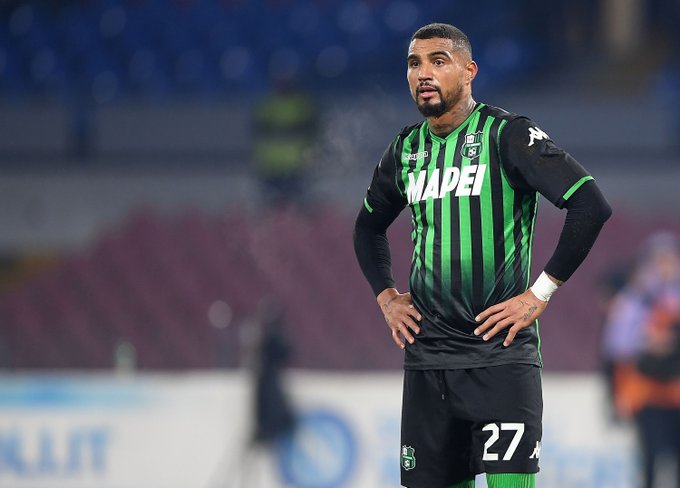