Real Madrid have omitted Cristiano Ronaldo from their new kit campaign, giving a huge hint that the Portugal international is nearing a move away from the Santiago Bernabeu this summer.

The 33-year-old is believed to be pushing for a transfer after being made to feel undervalued by Real, with Juventus the leading club to lure him away in an £88million deal.

And now they have fuelled the rumours even further by leaving Ronaldo off the promotion for their new kit.


Karim Benzema, Marcelo, Sergio Ramos, Marco Asensio and Toni Kroos all take centre stage in the campaign, while the website crops Cristiano Ronaldo out of the club’s history.

Images from their 2014 Champions League victory shows only Gareth Bale and Ramos, both were instrumental in winning La Decima, while Ronaldo is also out of the three subsequent group shots.

There have been claims that Ronaldo’s ties to Nike prevented him from participating in the shoot, but Sergio Ramos is also sponsored by Nike.

Furthermore, Ronaldo’s association with a rival brand has never hindered him from being included in previous kit launches, and this is the first time he has been absent.


The plot gets even deeper on Real’s official shop website, where every player has been pictured in the new Jersey except for Ronaldo.

Instead, there is just a shirt with Ronaldo’s name and number on the back.

Fans have also grown fearful that he will leave due to Real’s silence on the matter, with the club having released statements regarding rumoured transfer of Kylian Mbappe and Neymar.


Reports in Spain claim Real are willing to accept Juve’s £88m bid for Ronaldo, with both parties keen to part ways.

Fri Jul 6 , 2018
Brazil coach Tite has boldly decided to reveal his starting XI more than 24 hours before their World Cup quarter-final match with Belgium. Brazil progressed to the last eight of the tournament after a 2-0 victory over Mexico and are favourites to reach the semi-finals on Friday evening. In the […] 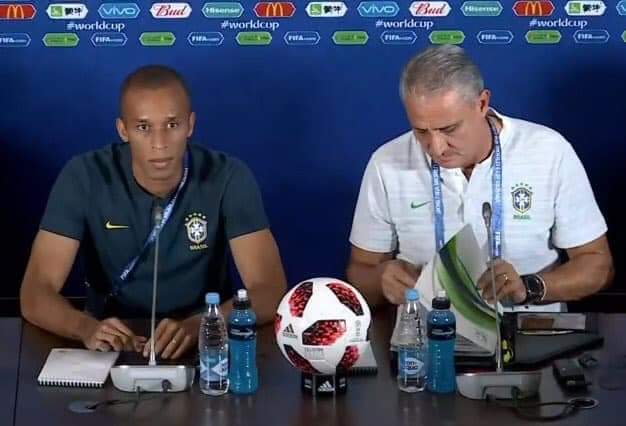