Davide Zappacosta insists he is ‘only thinking about Chelsea’ with speculation linking him with a move to Inter Milan.

The Italian right back, who joined Chelsea last summer from Torino, has emerged as a key target for the Serie A club.

Sky Sports claimed on Wednesday that Inter met with Zappacosta’s agent at their headquarters in Milan and were determined to make a deal.


It was also reported that Chelsea were willing to allow Zappacosta leave for £17.5m, despite the player still having a contract at the club until 2021.

Asked about the speculation surrounding his future, Zappacosta said: ‘I just want to have a great season, regardless of where I play.

‘Inter? The interest is pleasing but I don’t know anything about it and I’m only thinking of Chelsea.’

Like Zappacosta, Michy Batshuayi has also been heavily linked with an exit from Stamford Bridge this summer.

The Belgium international spent the second half of the 2017-18 season on loan at Borussia Dortmund and is behind Morata and Olivier Giroud in the pecking order at Chelsea.


However, Batshuayi is unlikely to be signing a permanent deal with Dortmund after the German club’s sporting director ruled out a transfer.

‘We are searching for Mister X, but it is not Michy Batshuayi,’ Michael Zorc said.

‘There is nothing to be reported today, tomorrow or the day after tomorrow.’

Fri Jun 22 , 2018
Diego Simeone has hit out at Lionel Messi and suggested the Barcelona star cannot raise his game in an average team the way Cristiano Ronaldo can after Argentina’s shock defeat to Croatia. Argentina are on the brink of an early World Cup exit after a 3-0 loss to Croatia and […] 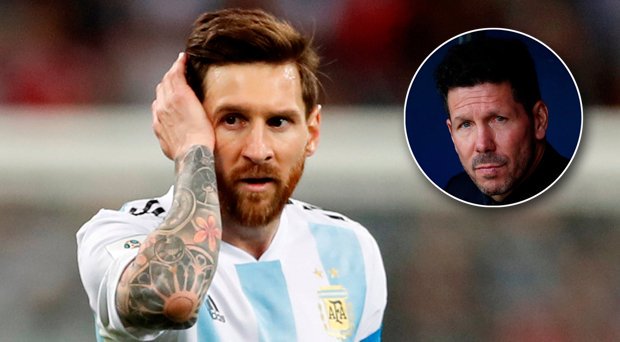