Paris Saint-Germain defender Dani Alves has revealed that he would like to be “listened to more” as he says his experience could be of great help for the club in their quest for breakthrough in Europe.

Alves was a three-time winner of the Champions League with Spanish giants Barcelona, as well as a runner up in the competition during his time with Juventus in 2016-17.


The 35-year-old also boasts a couple of Europa League crowns with Sevilla, as well as a Copa America and two Confederations Cup for Brazil as well as a bevy of domestic honours won in Spain, Italy and France.

And while PSG have accomplished plenty of domestic glory in recent years, however they have been poor in Europe, with their latest set-back blowing a 2-0 first-leg advantage to Manchester United in the Champions League last, despite the second leg taking place in their home ground.

Alves believes he might be able to help solve those woes if his voice had more weight at Paris, pointing to his track record as evidence.

“You have to listen to the experience, I want to be listened to more,” Alves told RMC Sport. “I know what can pull us up. I have experienced it.

“I have the feeling that people don’t know in the club. I know how we win, and how we lose. I’d like to be followed, to be listened to, because I’ve already gone through it.”


Alves says he warned against taking a club like Manchester United too lightly, and feels the team did not properly prepare itself for the fight that was coming.

“For everyone, it was an unpleasant surprise, but I had warned, the historical club was Manchester, you have to be careful in this competition,” Alves said. “The Champions League, like in tennis, the story will always be against you.

“Whatever the situation, it’s up to us to make our story, We have to create it, that’s my feeling. We missed this point – the idea that we were going to war.”

However, despite the setback in Champions League, Alves has nothing but praise for PSG manager Thomas Tuchel, who is in his first season at the club.


“For me, Thomas Tuchel is the best transfer made by PSG since my arrival,” Alves added. “I had never seen a coach so smart and so much in the service of the team.

“He studies each of our games very well. We’re enjoying our time with him.”

Alves and PSG will look to claim their second straight league title this weekend as they visit second-place Lille.

Fri Apr 12 , 2019
Unai Emery has hit back at Carlo Ancelotti after the Napoli boss claimed the sight of Arsenal players suffering from cramp would give his team major encouragement ahead of their Europa League quarter final second leg. The Gunners will head to Naples with a key 2-0 lead after one of […] 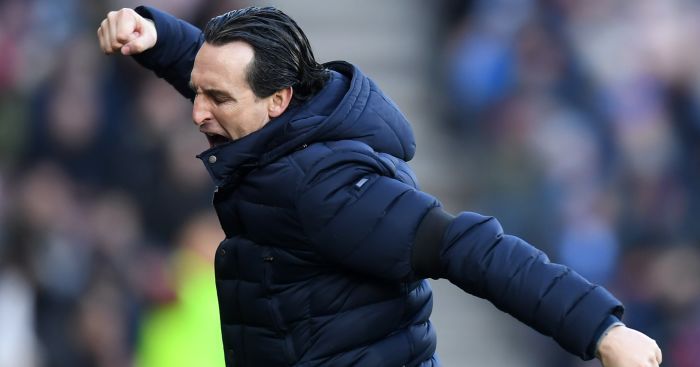