Kepa Arrizabalaga has come out to explain his on-pitch row with Maurizio Sarri in the final against Manchester City, which threatened to overshadow Chelsea’s penalty shootout defeat to Guardiola’s side.

The £71m signing was involved in the incident at the end of extra time, where Willy Caballero was set to come on after Arrizabalaga went down injured.


Sarri has described the incident as a “misunderstanding” in his post-match press conference but he had to be held back Antonio Rudiger, when confronting his goalkeeper.

Arrizabalaga moved to assure fans that he maintains a good relationship with his head coach and addressed the incident after the game.

“I don’t know how it went out, it is not the best image,” Arrizabalaga told reporters after the match. “I have spoken with the boss. I think it was misunderstood.

“I understand that on television, on social media, they’re talking about this but I am here to explain it, to say that it wasn’t my intention to go against the manager. We have spoken now, and I was only trying to say I’m fine. He thought I wasn’t fine. It was in tense moments, with a lot happening.


“Of course I did [see my number go up on the digital board]. But because of that, it was until the medics had got back to the bench to explain I was fine, that I could continue. It wasn’t that I was refusing to be substituted, it was a way of trying to tell the bench that I was fine.

“It has to be understood, too, that these were the last few minutes of a final, and I didn’t realise the reactions. It was only when I say they were going to change, I tried to say I was fine. It was the final minute, with a lot going on. I know the image it’s given, but I never intended to refuse to go off. It was only to say I was fine.

“I don’t think it has to be the major act of this final. I understand we played a good level against one of the best teams in the world. We were close to winning, obviously we’re sad that we didn’t, and I think the team needs to continue playing like this, because today we’ve shown we can compete against the best teams. Among the negatives, we have to take the positives.”


“Well, I think we competed well, against a great team, we were close, the luck of the penalties was we couldn’t win and I think the team competed well,” he added.

REVEALED: The time Messi did a Kepa for Barcelona and refused to be substituted in 2014

Tue Feb 26 , 2019
Kepa Arrizabalaga grabbed the headlines from the Carabao Cup final after refusing to be substituted – but he is not the first player to disobey his manager. The Chelsea goalkeeper was in fact following the lead of one of the greatest players of all time, in Barcelona’s In October 2014, […] 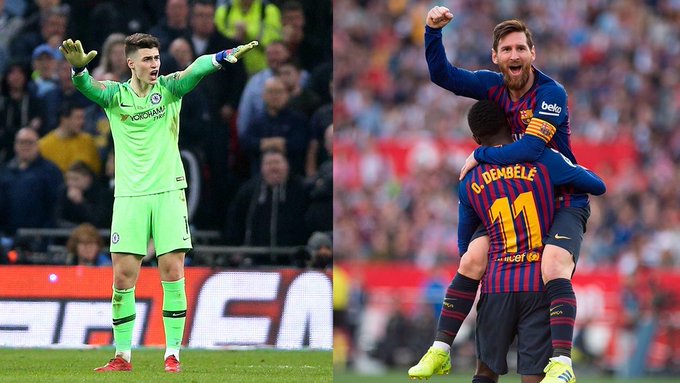