Kepa Arrizabalaga reportedly told Willy Caballero he was the better goalie after refusing to be taken off during Chelsea’s Carabao Cup final loss to Manchester City.

Maurizio Sarri wanted to introduce Caballero in the extra-time after Kepa went down with cramp at Wembley, but the Spaniard refused his manager’s instruction and demanded to stay on for the penalty shootout.


While Kepa says the incident was a ‘misunderstanding’, Chelsea have fined the 24-year-old a week’s wages and there have been calls for Sarri to bench him for Wednesday clash with Tottenham.

According to The Sun , Caballero and Kepa ‘squared up’ in the dressing room after the game, with Gianfranco Zola and Sarri also tearing into the Spaniard.

The report claims Kepa told Caballero to his face that he was the superior ‘keeper which made the latter angry.

Asked if Azpilicueta should have intervened on the pitch, Sarri replied: ‘The captain spoke to me immediately after the match, then he spoke with Kepa.

‘Yesterday we spoke altogether, the situation is really very clear in the dressing room.’


‘After yesterday the situation is finished. He made a mistake, but stop. I am sure he understood that he made a really very big mistake. For me it’s finished,’ the Italian said ahead of Chelsea’s match with Spurs.

‘I spoke with Kepa of course, then we spoke altogether, he said sorry to the technical staff but it was not enough.

‘Then he said sorry to teammates and the club, I think he made a big mistake but we need to be taller, we don’t want to kill him. So there is a decision from the club.’

On whether starting Kepa against Spurs would send out a bad message to the rest of Chelsea’s team, Sarri said: ‘It will be a decision for the group, for all the players.


‘I want to send a message to my group – I have to decide which is better.

‘I have to decide for my group not with my group. I want to send a message to my group – stop.

Sun Mar 3 , 2019
Lionel Messi had blood in his mouth after a clash with Madrid defender Sergio Ramos during Saturday’s El Clasico match, claims Gerard Pique. Messi and Ramos were involved in a flashpoint in the first half of Barcelona’s 1-0 win at the Bernabeu that moved them 10 points clear at the […] 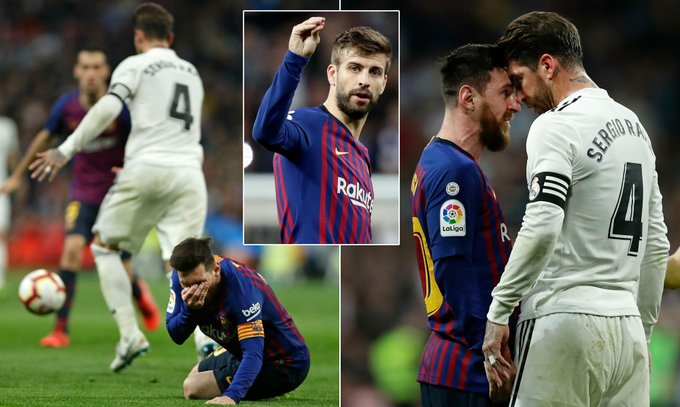