Jurgen Klopp believes Arsenal are a bigger threat to his Liverpool team now they are no longer in the comfort zone they were in under former manager Arsene Wenger.

After losing his first two matches, Unai Emery has masterminded a 12-match unbeaten run in all competitions and a win over Liverpool on Saturday could see the Gunners move to within just a point of the Premier League leaders.


‘It will be a big challenge they have all the different tools,’ he said. ‘They can be creative, they have rhythm, they are demanding in midfield they win balls high up on the pitch, they have the speed. They have plenty of star players.

‘Arsene Wenger is one of the best managers in the world there is no doubt about it but sometimes after a very long time the mood in the club changes a little bit and it’s quite difficult to work against that.

‘That was the situation last year, people respected him a lot, well deserved, but on the other side they thought they needed to change something.

‘To change something is only good if it’s for the better. Unai Emery, all people in football knew how good he is. Not all Arsenal fans were over the moon in the first moment but that’s England a little bit, you want the posters boys.


‘You can go a bit under the radar, but he won eight titles in the last three years so that’s pretty big. It is clear that things were going to change the players would know that, that’s how it is.

‘If a new manager comes in, the same when I came to Liverpool, all the players are immediately out of the comfort zone. That’s how it is. They all have to prove it’s not just the name the footballer as well and they used it pretty well.’

Sat Nov 3 , 2018
Chelsea want to take advantage of the uncertainty at Real Madrid by trying to offer a new contract to Eden Hazard. And Hazard could yet be given the Chelsea captaincy if he stays at the club. Hazard is waiting for a signal over whether or not Real will make a […] 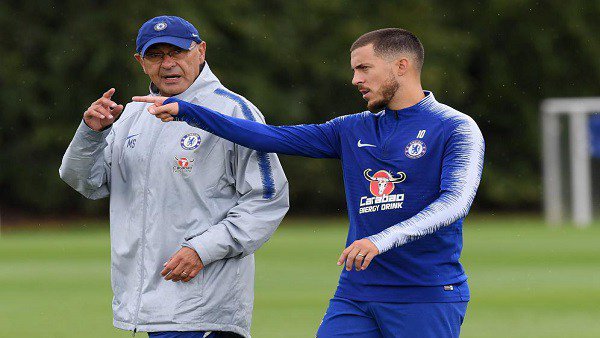