Alphonse Areola was desperate to join Chelsea this transfer summer, according to their goalkeeping coach Christophe Lollichon.

The Paris Saint-Germain goalie was reportedly the subject of interest from Chelsea before the club spent a world record transfer fee on bringing Kepa Arrizabalaga to Stamford Bridge.

Chelsea needed a replacement for Real Madrid-bound Thibaut Courtois, and it seems Areola was hopeful he would be the person to fill in.


‘We spoke a lot in the summer. He wanted to come here but the final decision was not my responsibility,’ Lollichon told Le Figaro.

‘It would have been a pleasure to work with him.

‘I did not have to wait until Thursday [on his France debut] to discover Alphonse. For me, he is already the best French goalkeeper today.

‘His size, his ball-playing qualities, his calmness, he is the goalkeeper most adapted to playing in the way of the team. We eulogise about Lloris too much, but Areola is above him.

‘Against Germany, he was very good in his position and his ability to cut out balls behind his defence. It is the base of any goalkeeper, but not everyone can do it as well.’


It is unlikely Chelsea will be looking into the market for another goalkeeper in the next few years having spent £71million on Bilbao’s Kepa.

The Spain international has gone straight into the starting lineup and has helped his team remain unbeaten in the new league campaign.

Sun Sep 9 , 2018
Willian has dismissed claims he wanted to leave Chelsea in the summer transfer window. The Brazilian was strongly linked with transfers to both Manchester United and Barcelona before the summer window closed. Barcelona had at least two offers rejected by the Blues, while the United were said to be considering […] 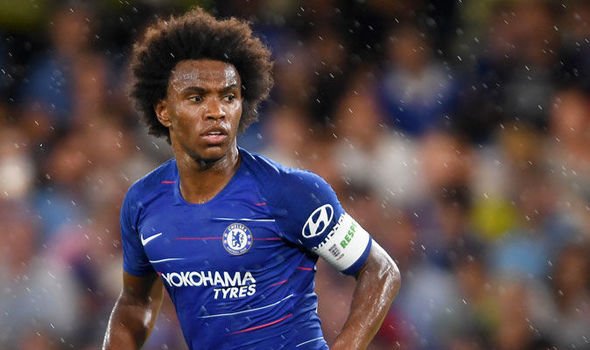