Real Madrid are ‘extremely serious’ about signing Neymar at the end of the campaign.

That’s according to journalist Duncan Castles, who says Madrid chief Florentino Perez wants to make him ‘the centre point of a new team without Cristiano Ronaldo.’

Neymar left Barcelona to join the French champions back in 2017, completing a world-record £200m transfer to the Parc Des Princes.


Now, though, he is being expected to join Real amid rumours he is not happy in Paris.

According to Castles, the European champions are ready to get a deal done come the end of the campaign.

“Madrid, I’m told, are extremely serious about making this happen at the end of the season,” he told The Transfer Window podcast .

“They’re prepared to put down the money required in terms of the transfer fee – which will obviously be substantial for a player who cost €222m just to activate the release clause from Barcelona less than two years ago.

“And wages, he’s on €30m net basic at Paris and I would expect an increase on that.


“I’m also told Madrid have been encouraged by Neymar and by his father in that pursuit, not just in the public pronouncements that Neymar kind of slips in from time to time about wanting to play elsewhere in his career and being interested in going back to La Liga, but also in private discussions.

“So this, I think, is now extremely serious and the decision really will come down to Paris St-Germain. And I think there is scope for Paris to accept that they’ve had their time with Neymar and that time hasn’t been as successful as they’d hoped it be when they signed the player.”

Neymar could become one of the very few players to represent both sides of El Clasico, with 105 goals in 186 games for Barca.

Castles claims Real have wanted the 27-year-old since his time in Santos and had a ‘huge fight’ with their rivals to sign him.


“Real Madrid, as you know, have been pursuing Neymar since his time in Brazil,” he said.

“They had a huge fight with Barcelona to try and get him from Santos, failed in that. Had a go at trying to get him out of Barcelona direct to Real Madrid.

“Then, go to Paris St-Germain, and since that point Florentino Perez has seen that as the opportunity to get him back to Spain, into Madrid and make him the centre point of a new team minus Cristiano Ronaldo. Cristiano Ronaldo’s gone last summer.”

Maurizio Sarri: I don't know if the players are still with me

Tue Feb 19 , 2019
Chelsea boss Maurizio Sarri has said that he is not sure whether his players are still with him after his side’s 2-0 defeat to Manchester United in the FA Cup. The Blues have now lost three of their last five matches in all competitions without scoring, with Bournemouth and Manchester […] 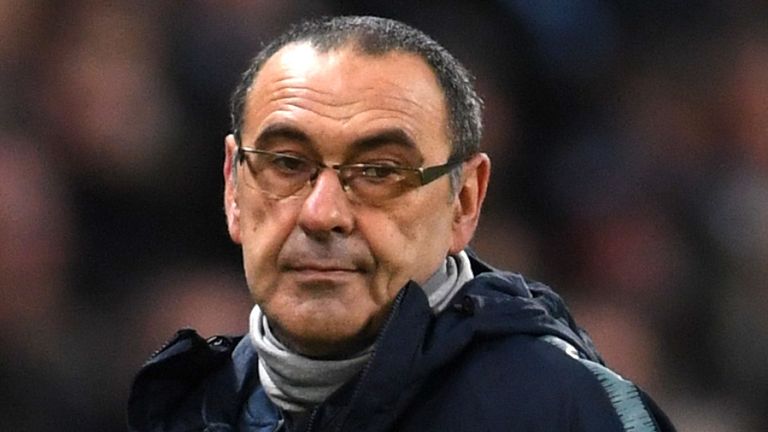