New Liverpool signing Alisson Becker says he is happy to have joined the club and has revealed why he chose Liverpool despite interest from both Chelsea and Real Madrid.

Liverpool made Alisson the most expensive goalkeeper in history by paying Roma £66.8million to get him, beating off plenty of competition.

New Chelsea manager Maurizio Sarri wanted the Brazilian to replace Thibaut Courtois, and even made a last-ditch phone call to convince him.


But Alisson has now revealed one of the reasons why he joined Liverpool was because of the atmosphere at Anfield during Roma’s Champions League semi-final last campaign.

‘Yes, in part it did influence the decision,’ Alisson told Liverpool’s official website .

‘When you make an important decision like this it’s not just a decision to change clubs, it practically changes your entire life, my family’s life, my wife, my daughter.’


‘That game definitely did have an influence but I also watched other games,’ he said.

‘I’ve seen other games where I could see the way Klopp had the team playing.

‘That has made me really excited to be part of this group.

‘Apart from the fact that the club is massive, the players that have come through here and the titles won.


‘Hopefully I can play a part in the history being created here, win titles and be a part of the project that has been developed here in the past few years so we can see Liverpool rise once again.’

Fri Jul 20 , 2018
Petr Cech’s agent insists the goalkeeper is focused on staying at the Emirates and claims Chelsea have not tabled any offer. The 36-year-old is about to enter his fourth year with Arsenal but faces the possibility of being Unai Emery’s back-up goalie after the arrival of Bernd Leno from Bayer […] 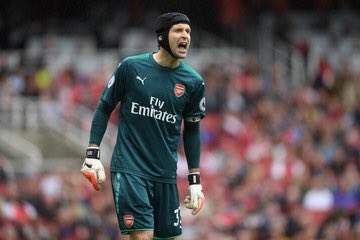