Zinedine Zidane would accept an offer from Chelsea to become their new head coach if they agree to match his three key demands, according to reports.

Maurizio Sarri is under pressure at Stamford Bridge after a poor run of results and faces the sack if Chelsea miss out on Champions League qualification for next campaign.


Zinedine has been out of work since he decided to leave Real Madrid after guiding the club to their third successive Champions League trophy at the end of last season.

But according to The Sun , the 46-year-old is interested in the Chelsea job if it were available as long as the board are willing to match his terms.

One of Zidane’s demands is that they keep Eden Hazard as he wants to build his team around the Belgium international.

Hazard will have just a year left on his contract with Chelsea in the summer and has made it clear he would be interested in joining Real Madrid.

Zidane’s second demand is that he is given a £200 million transfer budget, plus any money he receives from selling players.


Zidane also wants to play a key role in Chelsea’s transfer process and have a bigger say on which players are signed.

The Sun also claims that Zidane is not expecting to receive an offer from Chelsea yet as Sarri could still turn around the club’s form and could still end up winning the Carabao Cup and the FA Cup.

Pjanic admits 'some interest' with possible move to Manchester United

Mon Feb 18 , 2019
Miralem Pjanic has conceded there was “some interest” with possibly joining the likes of Manchester United and Barcelona last year. The Juventus midfielder was linked with a transfer away from Turin in the summer, but chose to stay to play with Cristiano Ronaldo. Despite the attraction of playing in the […] 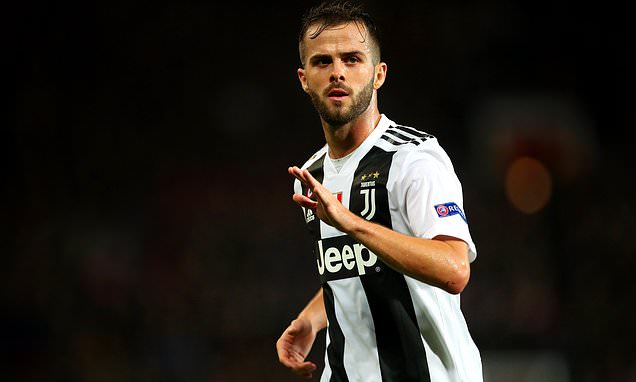