Real Madrid’s talks to sign Manchester United midfielder Paul Pogba have hit an impasse due to the Frenchman’s staggering salary demands, according to reports in France.

Eden Hazard is set to become Real Madrid’s first ‘Galactico’ signing of the summer window after the club reached a €100 million (£86m) agreement with Chelsea for the Belgium international.


The announcement is expected to be made after Chelsea’s participation in the Europa League final against Arsenal at the end of May.

Zinedine Zidane is determined to overhaul Madrid’s team after a poor campaign both on and off the field and the Spanish giants have turned their attentions to other transfer targets after getting Hazard’s deal over the line.

According to L’Equipe, Zidane is delighted to have landed Hazard and wants Madrid to negotiate a transfer for Pogba who cut a frustrated figure for much of United’s campaign despite being the club’s only representative in the PFA Team of the Year.

The report claims Pogba’s €15m-a-year demands are getting in the way of the deal as they do not match up with the complex wage structure in place at Real Madrid.


A Real Madrid source is said to have told L’Equipe: ‘A Neymar or an [Kylian] Mbappe can upon entry be the highest paid player in the squad, but not a Pogba.’

Like Hazard, Pogba has made no secret of his interest in working under Zidane in the lead-up to the summer window.

‘Like I’ve always said, Real Madrid is a dream for anyone. It’s one of the biggest clubs in the world,’ Pogba said at the end of March.

‘There is also Zidane as a coach and it’s a dream for anybody who likes football.

Zidane has also refused to rule out an offer to sign Pogba amid the growing speculation surrounding the United star’s future.


‘I like Pogba a lot and that’s nothing new,’ the Madrid manager said last month.

‘I know him personally and he is different. He adds something that few others can do, thanks to his quality.

‘He knows how to attack and how to defend.’

Tue May 14 , 2019
Chelsea and Manchester United target Nicolas Pepe has spoken out about his future as the clubs prepare to chase the Ivorian’s signature this summer. Arsenal are also one of many in a pack of clubs hunting the signature of Nicolas Pepe as they look to strengthen their forward line ahead of […] 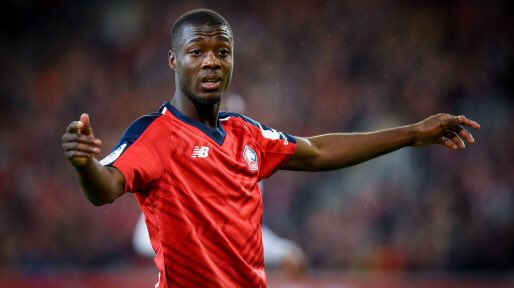