Manchester United manager Jose Mourinho has slammed Manchester City’s new documentary All or Nothing after it depicted him as a defensive manager.

The new eight-part Amazon Prime series retells the story of City’s 2017/18 title win season and viewers are given a fly-on-the-wall perspective of several of Guardiola’s team meetings.


In one episode, narrator Ben Kingsley describes City’s 2-1 win at Old Trafford as ‘Guardiola versus Mourinho; possession versus defence; attacking football versus park-the-bus’.

And in another, Kevin De Bruyne talks about the lack of chances as a 20-year-old under Mourinho while he was at Chelsea.

Discussing the documentary, Mourinho told Sky Sports: ‘You can have a fantastic movie while respecting others.

‘You don’t need to be disrespectful to have a fantastic movie.


‘You can be a rich club and buy the best players in the world but you cannot buy class and they showed that clearly, that was really obvious.’

Mourinho is predicting a ‘very hard season’ for United after all of their top-six opponents strengthened during the transfer window.

‘Last season we put ourselves in a difficult position, because to do better we can only finish first,’ the Portuguese said.

‘When I read sometimes and watch sometimes it looks like we finished sixth or seventh and everybody did better than us. We finished second.


‘Tottenham made an incredible investment by keeping their players, that’s the best investment you can make. They could be spending £200m but if they lose Harry Kane or Christian Eriksen.

‘The biggest investment [for Spurs] was keeping all their best players. Arsenal will be better even though they lost their first match. I think it’s going to be a very hard season.’

Thu Aug 23 , 2018
Aaron Ramsey wants to know where he figures in Unai Emery’s plans for Arsenal before he signs a new contract with the club, according to reports. The Wales international will be out of contract next summer and talks over a new deal have stalled, alerting the likes of Chelsea and […] 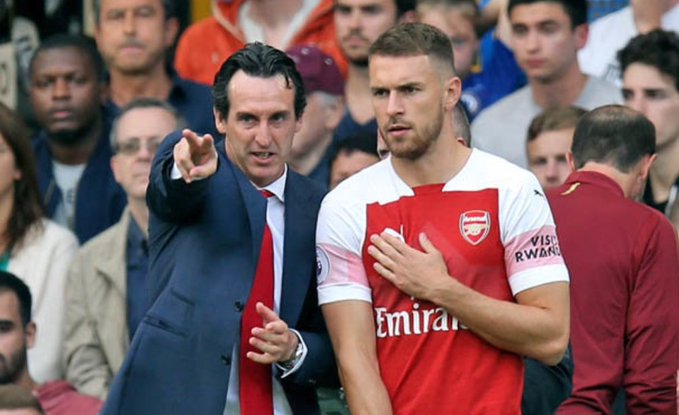