Maurizio Sarri has revealed he may have to add a winger to Chelsea’s January transfer plan, but has defended his use of Callum Hudson-Odoi.

Chelsea have been working on trying to sign a striker in January, but injuries to Pedro, Ruben Loftus-Cheek and Hudson-Odoi have worried Sarri over his lack of options on the flanks.

Chelsea are already in talks to try to sign Christian Pulisic, who can play on either wing, but Dortmund have so far been adamant the winger will not move in January.


Lyon’s Nabil Fekir is another winger Chelsea have shown an interest in and Sarri believes that position is more of a concern.

Asked if he was thinking about either Batshuayi or Abraham, Sarri said: “No, because I have the option with (Eden) Hazard in this position. We have (Alvaro) Morata and Hazard who can play very well in this position, as we have seen in the last two or three matches.

“So I think that at the moment I don’t need another striker. Maybe another winger, because now we are in trouble with the injuries of Pedro, of Hudson-Odoi, Loftus-Cheek. At the moment I have no option for the wingers.”

Sarri was booed for substituting Hudson-Odoi in the Boxing Day win over Watford, although it was revealed the 18-year-old had felt pain in his hamstring.

Hudson-Odoi only has 18 months remaining on his Chelsea deal and has refused the club’s offer of a new contract while he waits to see if he will get first-team opportunities.


Speaking ahead of Wednesday’s Premier League game against Southampton, Sarri said: “In Europe, there are few players, 18-year-old players, with matches at this level. I think Hudson-Odoi in this season played four official matches in Europe, so I think that he has been lucky. Although he is not lucky, he is good.

“It’s not easy at this level to take the young players from the Academy and not only here, everywhere in Europe. Sometimes there are one or two young players in Barcelona, from the academy, sometimes one or two Real Madrid.

“But zero in Juventus, zero in Paris Saint-Germain. It’s not easy and I think that we are lucky because we have (Ethan) Ampadu, we have (Andreas) Christensen and we have Hudson-Odoi, so we are lucky. We are either really very lucky, or the Academy is very good.”

Asked whether or not his young players are  impatient, Sarri replied: “I don’t know. Also the fans sometimes, also the club sometimes, and so I am in the middle because I have to win.

Wed Jan 2 , 2019
Barcelona head coach Ernesto Valverde has admitted he could leave the club following the current season. Valverde was named manager of the Catalan club prior to last campaign and the former Athletic Bilbao manager led his team to a successful season domestically, winning the league and cup double. Barca have […] 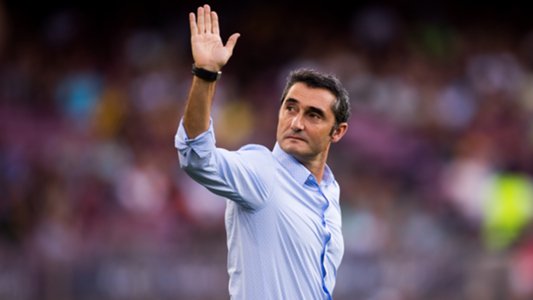