Jurgen Klopp considers missing out on Sadio Mane during his time at Borussia Dortmund to be “one of my biggest mistakes ever”, but the German has been able to right those wrongs at Anfield.

Back in 2014, the senagal intternational was preparing to part company with Red Bull Salzburg.

A transfer to the Bundesliga was rumored, with Klopp having monitored a talented forward since seeing him catch the eye at the 2012 Olympics.

Talks were held, but Mane slipped the net and ended up signing for Southampton in an £11.8 million ($15m) deal.

“I have made a few mistakes in my life and one of my biggest mistakes ever was not taking Sadio when I was at Dortmund,” Klopp said of that failed transfer saga.

“We were together in an office and I spoke to him.

“Afterwards I wasn’t sure but that was really my fault!

“He’s an outstanding boy and life gave me a second chance to work with him and hopefully we can both use it.”

Klopp returned for Mane during his first summer transfer window in charge at Liverpool.

A £34m ($44m) agreement was reached with Southampton in 2016, with that deal making him the most expensive African player in history at the time.

A considerable show of faith from the fans have been richly rewarded, with Mane having become a key figure for Liverpool.

He netted 13 times in his debut season, before plundering 20 efforts last campaign as part of a fearsome attacking unit which sees him work in partnership with Roberto Firmino and Mohamed Salah.

“The time I have spent with Sadio Mane has been fantastic,” Klopp added.

Mane has scored another nine goals this season, with that contribution helping Liverpool to the top of the Premier League and the last 16 of the Champions League.

Mon Jan 14 , 2019
Arsenal defender Sokratis Papastathopoulos took a dig at Unai Emery’s decision to leave Mesut Ozil out of his team for Saturday’s defeat against West Ham. The German was not included in Arsenal’s 18-man squad to face West Ham and Emery confirmed afterwards that it was a tactical decision to leave […] 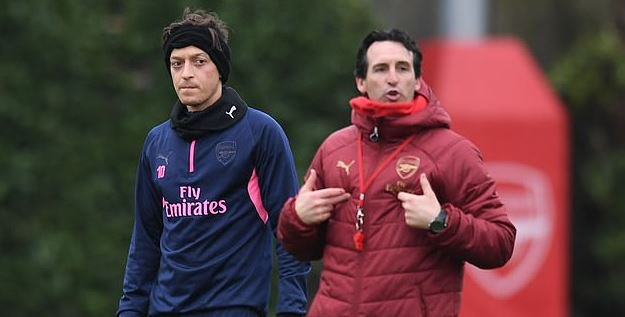