Liverpool manager Jurgen Klopp says he was annoyed that Niko Kovac made him wait so long to shake his hand after Tuesday’s Champions League stalemate with Bayern Munich.

The German champions managed to keep a clean sheet at Anfield, with Liverpool made to rue their profligacy in front of goal, though a score draw at the Allianz Arena will be enough to see them through.


After the full-time whistle, Klopp seemed to have an angry exchange Kovac – though insists it was a misunderstanding.

Asked about the confrontation afterwards, Klopp said: ‘I wanted to shake Niko’s hand immediately. He went and shook all of the Bayern players’ hands.

‘When he came back I said I was waiting. But he apologised and I said no problem.

‘It was a pure misunderstanding. I stood there like the ox in front of the mountain.’


Kovac was also asked about the incident, adding: ‘It’s common in England to shake hands after the final whistle. But first I am to my bench and not to him.

‘He knows that differently from England. But it was not meant to be bad, I apologised after that.’

Liverpool’s usually deadly attack were blunted by Bayern on Tuesday having had 10 days off since their last game, though Klopp said that was not the reason for their rustiness.


The German added: ‘Sharpness has nothing do with the last pass, it is about being in the moment, doing the right step. You saw the situations, they were nothing to do with the 10 days.’

Wed Feb 20 , 2019
Barcelona defender Gerard Pique reopened his feud with Real Madrid by claiming the team act in a hypocritical fashion when it comes to refereeing decisions – whichever sport they partake in. Madrid’s basketball side tasted disappointment on Sunday when they were downed 94-93 by their rivals in the Copa del […] 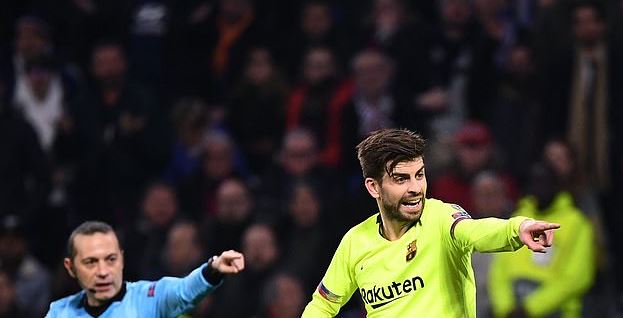