Manchester United forward Romelu Lukaku has ‘liked’ a video hinting that he could be set to exit the club in the summer transfer window.

Lukaku has played second fiddle to Marcus Rashford after Ole Gunnar Solskjaer’s arrival back in January and the 25-year-old is eyeing a possible move away from Old Trafford.


This week, Lukaku’s agent, Federico Pastorello, confirmed that the Belgium international is open to new challenges while also stressing that he remains focused on United for the time being.

Lukaku is tied into a deal with the Red Devils until 2022 but there’s a growing feeling the Belgian could be playing his football elsewhere next campaign.

‘Let’s see what will happen in the future at the end the season. It’s his second season here and he will still have three years on his contract until the end. Let’s see,’ Pastorello told Sky Sports.

Pastorello added: ‘The future is really very open but, at the moment, we don’t discuss about that because really the season is in a big moment.

‘He likes Italy. When he was a child he followed a lot the Italian league.

‘Everybody agrees today the Premier League is the best but years ago Italy was the best and they were the dreams for the younger footballer players.

‘Teams like Real Madrid and Barcelona of course attract any champion so he sees also in La Liga one day. Bundesliga for sure is a very good championship.’

P&P Sports management, the company owned by Pastorello, shared a video of the interview on Instagram and Lukaku ‘liked’ the post.


While this is not a confirmation that Lukaku wants to leave United this summer, it at least suggests Pastorello’s comments were accurate.
Lukaku only managed three goals in his opening 12 games under Solskjaer but he has returned to form in recent weeks despite falling down the pecking order.

Three braces on the bounce against Crystal Palace, Southampton and Paris Saint-Germain have reminded United fans of the attacker’s qualities.

Fri Apr 5 , 2019
Richarlison dismissed speculation about his future after recent reports claimed his agent had met with Liverpool manager Jurgen Klopp. The Everton star is a very important player at Goodison Park and would break Toffee hearts should he cross Stanley Park to move to Anfield. UOL Esporte claimed Richarlison’s agent, Renato […] 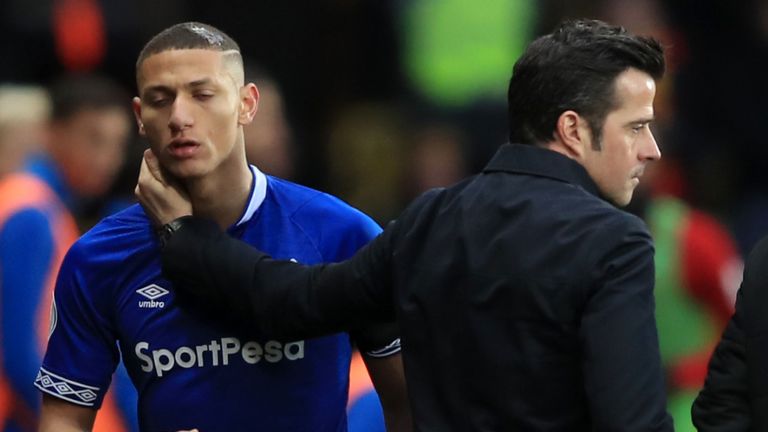