Gareth Bale’s agent has slammed the treatment of the Wales international from Real Madrid fans as “nothing short of a disgrace”.

Despite having formed part of a trophy-laden time for the Blancos, the 29-year-old forward continues to have his critics in the Spain.


He has struggled with form and fitness issues throughout a six-year era at Santiago Bernabeu, but there have been as many highs as lows.

Jonathan Barnett believes Madrid fans would be wise to remember as much, with Bale having contributed immensely to the success of the club in recent campaigns.

He believes those efforts are being unfairly overlooked during a testing season for all concerned, with one of the best players on the planet becoming a scapegoat.

Barnett told Sky Sports : “This generation of Real fans will be talking about Gareth’s goals for years to come. Frankly, they should be ashamed of themselves.


“Gareth deserves the greatest of respect. The way Real fans have treated him is nothing short of a disgrace.

“In the six years he has been in Spain, he has won everything. He’s one of the best players in the world. Those fans should be kissing his feet.”

Bale was jeered from the field on his recent outing for Madrid after he was drafted back into the starting line-up for their Clasico clash with Barcelona on Saturday, but played just 61 minutes.

Real were already trailing 1-0 when he was replaced by Asensio and would go on to suffer by that same scoreline to their rivals.

Barnett, though, insists his client will not be leaving Spain this summer while refuting claims Bale has struggled to intigrate himself into life at the club.

“Despite what the Spanish press are reporting, he’s happy, he speaks reasonable Spanish and there is no problem between him and the rest of the Real players. The people writing these things know nothing about him.


“There has not been one single discussion about Gareth leaving Madrid. He isn’t going anywhere this summer. Despite what’s been reported, he’s content, he wants to stay at Real and they want him.”

Bale has contributed 15 goals to Madrid this season, including a hat-trick against Kashima Antlers during another successful Club World Cup term.

Mon Mar 4 , 2019
Jose Mourinho has denied falling out with Eden Hazard before being sacked by Chelsea during his second spell at the club. Reports in the press had suggested a breakdown in their relationship in the weeks leading up to Mourinho’s sack in December 2015. Mourinho had led Chelsea to the Premier […] 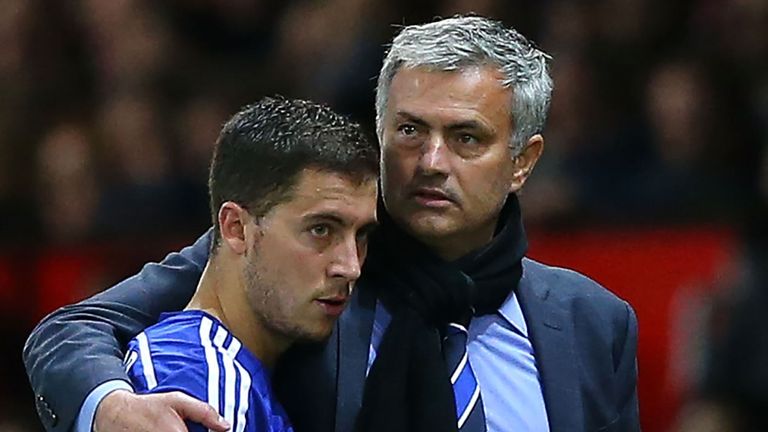