Paris Saint-Germain head coach Thomas Tuchel was not impressed by Manchester United’s tactics as they eliminated his team out of the Champions League on Wednesday.

United secured a 3-1 win at the Parc des Princes to go through to the quarter-finals on away goals, thanks to a Marcus Rashford penalty.


The Red Devils finished the game with just 28% possession, having scored their three goals from four shots on target as PSG dominated the game.

Tuchel was clearly frustrated after the match claiming that he ‘never had the impression that Manchester United wanted to win’ the match.

‘After the second goal, we controlled the match, we played with a lot of quality,’ Tuchel told RMC Sport. ‘We react well to the first goal we gave them. We had a lot of chances but we did not score the second, or the third.


‘In the second half, they didn’t have a single chance. I have the same feeling now as I did after our defeat to Guingamp in the Coupe de la Ligue, it was impossible to lose and we lost with three penalties.

‘Today, I never had the impression that Manchester United wanted to win here. We lost but we controlled the whole game. They won, congratulations to them, but I have no explanation as to how they won.’

Tuchel is referencing PSG’s shock 2-1 loss to Guingamp in the Coupe de la Ligue earlier this campaign, when the underdogs missed a penalty, then scored two in the last 10 minutes to eliminate the defending champions.

The German boss also had a strange take on the decision to award United a penalty, arguing that as Diogo Dalot’s ball was not on target, the handball should not have been given.

‘The rules surrounding the hand are always difficult to explain. The rules are not clear. It was not a shot on target and that makes it a penalty, okay’

Thu Mar 7 , 2019
Sergio Ramos has reportedly threatened to leave Real Madrid in a dressing room row with club president Florentino Perez. According to AS, the club skipper had a spat with Perez after the embarrassing loss at home to Ajax which knocked them out of the Champions League. The Spain international who […] 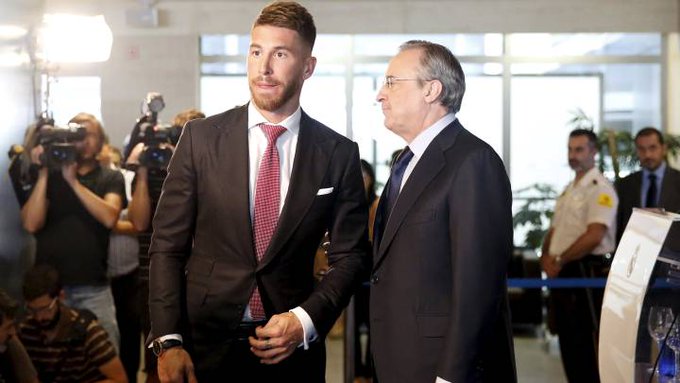